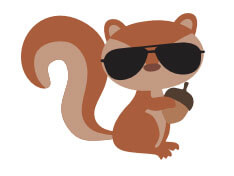 While most students enjoyed or even celebrated the recent solar eclipse, this astronomical event has devastated the squirrel population. As of Monday’s eclipse, public health leaders of Notre Dame’s squirrel community have reported rates of blindness as high as 47%.

“It was terrifying,” said one squirrel, absently nibbling at a red Solo cup. “I was rooting around in my favorite trash can, waiting to ambush unsuspecting students, when all of a sudden the sky went dark. I was so startled I dropped my ice cream cone. Next thing you know, I’m lying in a puddle of ABP mac ‘n cheese, and I can’t see a thing.”

Squirrels at different campus locations report varying rates of blindness. Carroll Hall squirrels were hit the hardest, with an 87% rate of blindness. “Of course nobody bothered telling us there’d be an eclipse,” said one infuriated Carroll squirrel. “We never had time to prepare. This is an absolute disgrace.”

Carroll squirrels are not alone in their outrage. “How am I supposed to chase after students if I can’t even see them?” said one furious squirrel living outside of Hammes. “My days of leaping from tree to tree with entire cookies wedged in my mouth, fighting possums over doughnuts and dragging Einstein’s bagels across God Quad are over.”

A few lucky squirrels managed to pilfer students’ eclipse glasses from their backpacks, sparing their eyes. “I stumbled upon them by accident, honestly,” said one South Quad squirrel. “I smelled a week-old Quarter Dog in this guy’s bag and went to check it out. Then I came across a pair of sunglasses and figured I may as well take those too. Little did I know they’d save my vision.”

Blinded squirrels have been offered free treatment at St. Liam’s, but most have refused, citing suspicions of malpractice. “My cousin Barry went in there for sugar addiction a year ago,” says one North Quad squirrel. “We found him a week later, face-down in a discarded Frappuccino. St. Liam’s pushed him over the edge.”

Irate squirrels, demanding safe healthcare and protection from future eclipses, plan to hold a demonstration on the steps of the Main Building next week. You can help by joining them in solidarity or by donating to their GoFundMe, “Help Blind Squirrels of ND.”