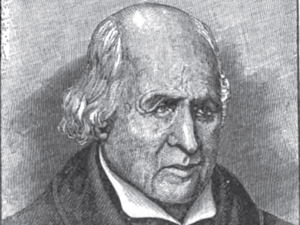 Upon purchase of this Bible, which was gifted to Badin for his ordination by Bishop John Carroll of Baltimore, the university assigned the task of analyzing the Bible to a small group of scholars. After thoroughly perusing the rare book, scholars have revealed that it is heavily annotated, with notes that provide insight into the earliest beginnings of the university.

Badin expressed several of his opinions regarding famous biblical stories. Alongside the story of Adam and Eve a note reads, “At this point, the story seems a bit derivative and cliché.” Next to the story in which Jesus feeds 5000 people, Badin included a note that reads, “You’d think Jesus might pick something a bit more appetizing than fish and bread…”

The majority of the notes that can be found in the Bible appear to be extraneous and unrelated to the sacred text, consisting of scribbled lists and notes in margins related to Badin’s personal life.

Many of Badin’s notes concern the land that would later become the grounds for the university. One note in particular appears to be a pros-and-cons list, entitled “Keeping the Land.” Under the “pros” column, Badin listed, “the diverse ecosystem; the beautiful lake; the separation from civilization,” while the “cons” column contains, “the lack of diversity elsewhere; the lake; the separation from civilization.”

Badin included several additional details about his land. On an empty page separating the gospels of Mark and Luke, Badin left a list labeled, “Possible ideas for land.” On the list are “re-gift it,” “set aside for bird-watching competitions” and, in a crossed-out bullet point, “build a school.” An arrow is drawn away from this piece, pointing to a note that reads, “unlikely there’d be much success with this.”

Badin’s true sentiments about his land are best captured in the note that is scribbled at the bottom of his list. It reads, “May want to re-gift land to my good friend. He knows a man named Sorin who has expressed interest in it, although I can’t imagine any purpose this land could serve him. This land is wrought with horrible weather and rather dull surroundings, and simply is not fit for human habitation.”

On one of the final pages of the Bible, Badin included a rough sketch of what appears to be the University’s log chapel, once the home of the distinguished priest. Beneath the drawing is a short paragraph containing what would today be considered a real estate listing. Scribbled in small handwriting off to the side of the listing is a comment made by Badin, that he does not expect much to come of the chapel. “This chapel won’t last long—it will be the first to go under a new landowner,” Badin’s writes.

The Badin Bible will be on display in the Rare Books Room of Hesburgh Library for the 2014 fall semester.