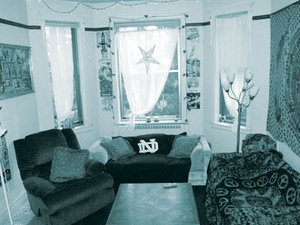 Keough Hall freshman Dan Schmidt* realized late Thursday night that it is in fact he who's the weird roommate and not his bizarre, cosplay-loving bunkmate, as he had previously thought. Schmidt, of Rochester, New York, says that the revelation took him “completely by surprise”.

“I was totally blindsided,” Schmidt says. The freshman was named homecoming king his senior year of high school and is now wondering if that was just a joke too. “I thought I had it nailed down when I walked in the door,” he says. “The kid is an aspiring magician. An ‘aspiring magician’. Christ. It would’ve been bad enough had he just been an accomplished magician.”

Sources say that Schmidt noticed early on in his first semester that whenever he entered the room, his roommate would leave soon after, but he attributed it to his roommate being socially awkward and “uncomfortable around my confidence.”

According to a fellow floormate, who prefers to remain unnamed, Schmidt thought that any debate on the matter was “really just settled” when initially looking up his roommate on Facebook last summer and seeing that his profile picture was a grainy, awkward snapshot of him in which he seemed unaware that the picture was being taken, especially when juxtaposed with Schmidt’s own picture depicting him surrounded by adoring orphans during his recent service trip to Honduras.

It was last Wednesday when, acting out of what Schmidt claimed was “sympathy,” he invited his roommate to dinner, only to receive a smirk and a “I’ll take a rain check, bud.”

“That’s when it hit me”, Schmidt says. “It’s me. I’m the weird roommate.” Schmidt took a moment to stare off into the distance quietly before continuing. “I mean, I just don’t get it. How did this happen? Where did my parents go wrong?”

The next day Schmidt noticed his roommate at the center of a large group of friends, laughing loudly at something he had said as they walked through the dining hall, only to grow quiet as they passed Schmidt, who was eating alone at a side table. “I was just grabbing a bite to eat between classes, not everything needs to be a social event — but I guess that doesn’t matter anyways,” Schmidt says.

When reached for comment last night, Schmidt could be seen rubbing his eyes and muttering to himself, “(Incomprehensible) It’s like I don’t even know what’s real anymore…”