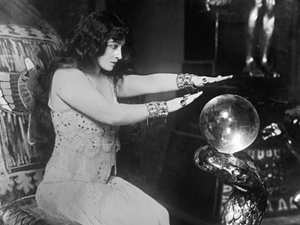 Juniors enrolling in the Mendoza College of Business’s Foresight in Business course expect to gain valuable, real-world-applicable experience through the class’s semester long projects. The class has become an important and required part of the Mendoza curriculum.

But a group of students who neglected to pay attention while DARTing got more out of Foresight than they had bargained for when they signed up for a different class entirely. The class was simply titled “Foresight” on Class Search. Most of the confusion seems to have stemmed from a lack of understanding of the business class’s full name, “Foresight in Business.”

Students who had hoped to better anticipate changes in the business world found themselves exploring  methods of predicting the future through mysticism and witchcraft. On the first day of class, visiting professor Barbara Gray informed her class that they, like her, were each blessed with an extrasensory psychic ability to predict the future.

“Some of the students were skeptical at first, but I knew exactly who was going to be in the class months before it started,” Gray says. “To prove it to them, I wrote down what each of them was going to have for dinner the next day and showed the list to them at the beginning of the second class. I was right about all of them. I thought about telling one student to avoid Indian night at the dining hall; I knew he was going to get sick, but I didn’t want to ruin the surprise.”

The experience, junior accounting major Shannon O’Flaherty says, was unlike anything she had experienced in other Mendoza classes.

“My friends had told me we’d have to investigate an emerging business trend,” she says. “I was hoping to look into sustainable farming in South America, but I’ve spent the entire semester learning how to read tarot cards.”

“None of my friends will let me practice on them,” Potter says. “I brought a crystal ball home once, but after I told my roommate how bad his grades were going to be at the end of the semester everybody got really bummed out.”

The students’ newfound psychic abilities have helped them predict stock market trends and succeed in business. Nevertheless, the Mendoza College of Business refuses to grant credit for the course, calling the course material “non-traditional” and outside of the college’s mission.

For O’Flaherty, her newly discovered gifts have been a double-edged sword. She has had an easy time studying for tests, predicting difficult questions weeks in advance of exams, but has lost all interest in sports after accidentally spoiling the results of the next five seasons of Notre Dame football while trying to discern the score of next season’s home opener.

“I’m not even buying tickets next year,” O’Flaherty says. “I already know the score of every game. You don’t want to know what bowl we end up in.”