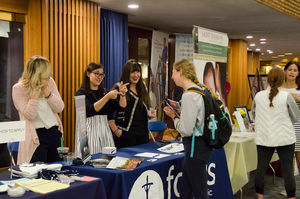 The Career Fair invariably gets a great deal of publicity each year, as scores of students line up to drop o business cards and resumes with top rms. But what about students who wish to explore avenues of leadership and service? In late September, the Center for Social Concerns organized the Post-Grad Service Fair, a smaller and more intimate version of the Career Fair targeted toward service-minded students.

The event, complete with long lines of swag-laden tables for students to peruse, took place in the Joyce Concourse. A wide variety of service organizations had a presence at the Fair — religious and secular, education- oriented, housing-related and in every region imaginable. Interested students were able to visit booths representing service in any corner of the globe, from Jamaica to Appalachia.

“Post-grad service is something that’s been an attractive option for me for a long time, and this past summer I worked for a program called Notre Dame Vision, which put the idea of ministry and direct relationships and faith-based work with other people on my mind as something that I would like to do after graduation,” said junior Maureen Schweninger. “I feel like the time right after graduation allows for this kind of independence and radical gift to others that I might not have later in my life, so I want to be able to take advantage of that now.”

Prominent national and international organizations — the Peace Corps and Franciscan Mission Service, for example — stood alongside smaller nonpro ts in an attempt to recruit Notre Dame students. “I think that our program especially is rooted in faith,” said one recruiter from the Society of St. Vincent de Paul, a Cincinnati charity. “And so coming to a Catholic school, and coming to an event like this with service-minded folks who wanted to make a di erence after graduation, was really important.”

Several organizations associated with Notre Dame had a presence at the Fair. ACE (the Alliance for Catholic Education) stood by with student recruiters, and even Notre Dame’s Master of Divinity program had a booth. Nazareth Farm, a Catholic service center known to many Notre Dame students as an Appalachia Seminar service site, also made an appearance.

“...I had no idea there would be so many different groups and organizations here,” Schweninger continued. “So it’s kind of hard to filter through so many awesome opportunities. But I don’t want to look back at this time and feel like I didn’t investigate all of these options and really discern what God would be calling me to post-graduation, although I’m only a junior. [It’s] something I want to be thinking about right now.”