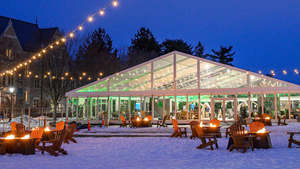 Controversy erupted on South Quad this past weekend as a ragtag group of extreme outdoorsmen showed up to newly established South Lodge expecting to find an actual hiking lodge.

“It showed up on our Tripadvisor app and looked like a real 5-star joint,” said Butch McDonald, one of the hikers in question. “I was fully expecting a memory foam mattress and a continental breakfast in the morning.”

The outdoorsmen had gotten sidetracked from their route and were looking for a resting place to recoup. Though the party had run out of supplies and been without food for three days, each hiker chose to avoid that night’s entrée from South Dining Hall. HERE Ambassadors on the scene were unsure how to handle the situation.

“I’d just finished breaking up this group of five kids for not properly sanitizing the TV remote when these dirty hiker men started banging on the door,” said Ratilda Narcson, a HERE Ambassador who was on duty in the Lodge that evening.

“South Lodge isn’t supposed to be a place where people come to actually relax and recuperate, it’s just a distraction from our polarized, pandemic-ruined world! They didn’t even have masks on!”

The HERE Ambassadors tried in vain to explain that South Lodge was not a 5-star luxury nature retreat, but rather a temporary indoor space for students to vent their frustrations via rocking too hard on a chair or “accidentally” pushing the puck too hard on the shuffleboard table.

“I just couldn’t believe it,” said McDonald. “This place had all the bells and whistles, but you’re telling me they couldn’t find a place for men who just spent three months in the woods to have a good night’s rest?”

After repeatedly being denied a place to sleep, despite the teepee chairs being more than sufficient, the hikers (who by this point had ordered Grubhub delivery from Taco Bell) began to grow unruly, forcing the HERE Ambassadors to call their good friends at the Notre Dame Police Department.

Some students around the quad noticed the tense scene and gathered outside of South Lodge in solidarity with the outdoorsmen. They chanted loudly for several minutes before the police arrived.

“I really felt like we had momentum on our side,” said a student who requested to remain anonymous. “We kept supporting the hikers until someone saw the police car headlights and shouted ‘COPS!!’ Everyone bolted instantly, just like every other time the cops show up.”

The hikers were forced to again explain their plight to the police, who were heavily armed with riot gear. “Once I figured out these guys weren’t violent rioters, I almost felt bad for ‘em,” said Richard Watson, a policeman.

After discussing the dispute with the hikers and the HERE Ambassadors, the police offered a solution: the tired, disheveled and hungry hikers could spend the night in the luxurious Morris Inn. They would get room service, clean towels, king-sized mattresses and a floor without any COVID-infected students. The outdoorsmen, however, demurred.

The rowdy band of adventurers was eventually relocated to a local Marriott off campus, which did include a shuffleboard out back. After being blown away by the tasteful, opulent Marriott property, they began their trek back to the hiking trail in the morning, but not before leaving a strongly worded review of South Lodge on Tripadvisor.