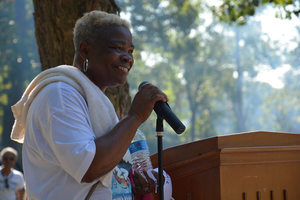 Despite some of South Bend’s political changes in recent years, parts of the community continue to struggle with gun violence — violence that has taken the lives of men, women and even children.

Community organizer Bobbie Woods is all too aware of this tragic and unnecessary loss of life. After losing her son Terrill to gun violence, Woods founded Mamas Against Violence (MAV), a nonprofit dedicated to supporting the families of gun violence victims. MAV fills several roles in the community: it acts as a support group for mothers of gun violence victims, offers college scholarships for family members of victims and helps families navigate the legal process after losing a child.

On Saturday, Sept. 23 — two days before the National Day of Remembrance for homicide victims — Woods led MAV and various community members, including Notre Dame students, in a march of remembrance for those who have died as a result of gun violence. The march, which opened at the Greater St. Matthew Church of South Bend, began with a heartfelt prayer for peace. The marchers, many carrying banners or wearing shirts or pins with images of their deceased loved ones, broke into songs and chants, including, “What do we want? Peace and love! When do we want it? Now!”

The march proceeded with an atmosphere at once convivial and serious — despite the solemnity of the occasion, laughter still rippled through the crowd when two different chants coincided and produced an unintelligible shout. The march ended at Muessel Grove Park, around a 20-minute walk from the church, where a small stage and a temporary memorial for the deceased stood waiting.

Speakers with diverse viewpoints — gun violence survivors giving testimony, community members emphasizing the role of the family in gun violence prevention or calling for changes in the education system — took to the stage for the next several hours to demand an end to the violence. Regina Williams-Preston, a teacher, emphasized the need for “inreach” rather than outreach, arguing that the community had to take its own action to bring gun violence to an end.

Numerous other speakers, including policeman Scott Ruszkowski, offered their thoughts on the matter. In a speech that provoked some ire among demonstrators, Ruszkowski stated that reporting potential crime “before the trigger is pulled” is not “snitching,” but honestly capable of saving a life. Ruszkowski also made an impassioned plea for better citizen-police relations: “We don’t want to take these reports. We don’t want to put sheets over bodies. We don’t want to put chalk lines and tape up and collect evidence and make it look like it’s all technological and go to court and sit in front of a jury … We want to go to cookouts. We want to come to your birthday party.”

Despite Ruszkowski’s assertion that the police force works for the citizens rather than against them, some community members took issue with the policeman’s argument that human behavior, not guns themselves, is responsible for violence: “I don’t care if we have ten billion guns. A gun doesn’t go off by itself … Somebody has to pull that trigger.”

Several more speeches followed Ruszkowski’s, and the ceremonies also included an interpretive dance and a poetry recitation. Community members came and went, enjoying the cookout and the various performances.

Woods spoke to Scholastic about Mamas Against Violence and its progress over the years. “The good thing is that we’re beginning to get the attention we so need in this community. We’re beginning to get better support … Notre Dame has now taken a notice to what we’re trying to do in our community, but there’s yet work to be done … We need to grow stronger, we need to be more proactive with our families, the victims that are left behind.”

“We do things for the perpetrators and I think we need to turn our attention more to the victims and the families that are left behind, hurting in this community,” Woods continued. “Because if we don’t, they don’t heal properly, which will promote more violence at some time, whether it be their kids or their grandkids. If you don’t get those mothers, or sometimes those fathers or siblings, that buildup of animosity or bitterness from the loss of the loved one, that sibling, that child, will grow … So we need to … first of all, let our families know that we are concerned, we care about their loss and that we’re not desensitized to the violence … in our community.”

Liam Dalton, a Notre Dame sophomore present at the event, believes that more Notre Dame students should consider involvement in the South Bend community. “There are people in this community that we can work with, provide support to, and learn from; in many cases, we can learn more from them than what we learn in the classroom.”

Dalton, who has been collaborating with Woods and working for the organization Everytown for Gun Safety, stated that he became involved with this issue “because if the only people fighting gun violence are those who have been directly impacted, they’re going to be outnumbered. But this is a huge problem that impacts everyone, whether they know it or not. I want a safer community and country for my kids. We should all fight for gun sense, and we should all fight for people like Bobbie.”