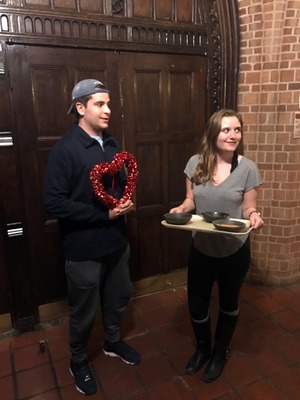 SOUTH DINING HALL — Sophomore Kathryn McQuillen arrived at South Dining Hall at 6:34pm on Thursday evening, four minutes late for her previously decided upon meal time with classmate Isaac Hallums. McQuillen casually strolled into the lobby while responding to a text message, still wearing clothes from her workout at Rolf’s earlier in the day.

Hallums, a Zahm resident and poor communicator, texted McQuillen a few days prior saying, “It’s been a while! Wanna catch up soon?”

Upon McQuillen’s reluctant acceptance, Hallums immediately contacted his entire dorm section to alert them that he had a date set up for Thursday and that he “really thinks this one might be something,” his RA reports.

The pair had a class together this fall, and all text messages exchanged indicated that this meal was a casual get together of two friends. “I’m guessing I probably won’t see him again until April or May,” said McQuillen upon agreeing to dinner.

After Hallums asked, “so, what’s your family like?” three minutes into the meal, McQuillen began to feel slightly alarmed. She looked to her right, only to see a table full of no less than four of Isaac’s friends smiling at her, one with his phone poised to take pictures of the two of them.

“Uh, I think I have to go,” mumbled the Lewis Hall resident from Dayton, Ohio. Hallums, whose face had produced seven ounces of sweat in the last half hour, flashed his friends a thumbs-up as McQuillen stood up to put her tray away.

“I’m not sure why he would think this is a date, especially because he never even mentioned anything even remotely romantic and, I mean, we’re at the dining hall for crying out loud,” McQuillen was heard saying to her roommate later that evening, mere hours before getting a text message from her dad alerting her that “some random ND guy” friend requested him on Facebook.

Since Thursday, Hallums has contacted numerous Michelin five-star restaurants in Chicago inquiring about Valentine’s Day reservations and called his parents asking to borrow “some money” for something “really important.”