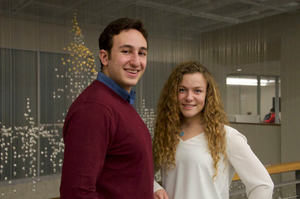 While Zachary Mercugliano and Aviva Lund are a ticket with limited student government experience, they have crafted their multifaceted platform with passion and idealism. Mercugliano and Lund spoke to the importance of intellectual and cultural diversity, while focusing on Notre Dame’s strong community: “Every single one of you has an individual voice,” Lund said. “And we want to hear every single one of those voices.”

Mercugliano-Lund advocated for fostering campus dialogue on a myriad of issues, promising that their administration would organize conferences and workshops focused on topics of diversity. They also suggested that the administration weave diversity training into existing dorm systems through “big-little” relationships.

“We were thinking of combining some kind of diversity training for the staff members of the dorm, and then having the ‘bigs’ also be trained … through their conversations with their littles, they can introduce these kinds of conversations to them and also ask questions from their background,” Lund said.

Mercugliano also emphasized the importance of support for clubs, a pertinent issue in the 2020 race for student body president and vice president.  He hopes to expand support for small, multicultural clubs, which he believes cannot “stand on their own” to the extent that larger and more established clubs can.

“We could go on the smaller level: smaller clubs that are just starting out, they could be managed on a much more personal basis,” he said. “They could have funds allocated to them much more specifically.”

Mercugliano-Lund also lobbied for the creation of a more connected, community-oriented

campus culture, suggesting a “blue dot-gold dot” dining system that could allow students in the dining halls to signal a desire to eat alone or chat with others. Lund described Notre Dame’s community as a “family,” expressing a desire to bring the campus closer together. In the spirit of community, they even hope to bring university president Fr. John Jenkins, C.S.C. to Milkshake Mass — according to Lund, something that “we’ve found out a lot of students want.”

resources, accessibility issues, the dorm-swipe policy and the off-campus exclusion policy. As a member of off-campus council, Mercugliano argued that “nobody should have to lose their community.”

Simply put, Mercugliano and Lund aim to streamline life for the average Notre Dame student, with ideas ranging from the sweeping to the everyday: Lund, for instance, mentioned possibly converting the Week@ND into an app so that students can more easily access the upcoming week’s activities. Lund argued that more accessible mental health care could reduce the stigma around mental illness and suggested that UCC representatives engage in dorm visits.

In their interview, Mercugliano and Lund — a fourth-year transfer student from Franciscan University of Steubenville and a freshman, respectively — made sure to address their newcomer status and what many might consider their lack of experience. Mercugliano and Lund claim to offer a unique set of skills and perspectives. They argued that the characteristics of their campaign — their ability to serve as a self-described “blank slate,” for instance — sets them apart. “We’re in a unique position where we actually can represent the students because we need the students’ input,” adding, “ I know that we both have what it takes for the job.”

Furthermore, Mercugliano feels that his past leadership experience — participation in

bureaucracy. He also described personal traits — “needing to be around people, loving to talk to people, being friendly, being approachable” — as his campaign’s strengths.

Mercugliano cited an anecdote from his past student government experience as evidence of his ability to forge connections amongst a divided student body often indifferent to student politics. To call attention to the problems associated with Steubenville’s student government, he created an anonymous Instagram “campaign” for his dining hall’s “ever-breaking” soft-serve ice cream machine. The social experiment proved a wild success. “Everyone was making soft-serve fan accounts,” he said.

He stepped down before the election, but the incident highlights Mercugliano’s unique approach to student leadership. It indicates his sense of humor and willingness to laugh alongside his classmates. “You basically just have to not take yourself so seriously.”