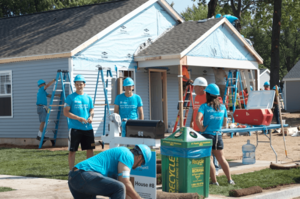 As Notre Dame students began their second week of classes, a new spirit of philanthropy swept through St. Joseph County. The 35thCarter Work Project — a weeklong homebuilding effort organized by Habitat for Humanity — came to town, centralized at a Mishawaka worksite about 15 minutes from campus.

An opening ceremony on Aug. 26, attended by hundreds in Purcell Pavilion, kicked off the week of construction. The ceremony, complete with videos and speeches describing the work and impact of Habitat for Humanity and its affiliated supporters, hosted several celebrities. Former President Jimmy and Rosalynn Carter, Garth Brooks, Trisha Yearwood and David Letterman all attended, as did South Bend Mayor Pete Buttigieg and Reverend John I. Jenkins, C.S.C. Rev. Jenkins blessed the project, asking that Habitat volunteers “build not just structures ... but true homes.”

The construction and remodeling of homes began the next day. The Carters, as well as Habitat for Humanity executives, appeared for several press conferences and interviews throughout the week. In one such conference, Rosalynn Carter praised the Mishawaka branch of Habitat for Humanity for its organization and the dedication of its volunteers: “I think this is the most we’ve ever had ... We’re excited about being here.”

Habitat for Humanity, known for its localized system of management and sweat equity-based business model, first attracted the attention of the philanthropy-minded Carters several decades ago. Jimmy and Rosalynn Carter, although not Habitat for Humanity’s founders, have supported the organization for over 30 years through builds such as this one.

The Carters advised young people to take advantage of their college years, either by joining Habitat or by volunteering for similar organizations. President Carter, who grew up in a home lacking electricity, understands the plight of substandard housing firsthand. He cited Habitat for Humanity as his “first recommendation” for college students looking to make a difference, adding that the heart of philanthropy lies in treating people as “equals to you, which they are before God.”

Habitat for Humanity International CEO Jonathan Reckford, who appeared at both the press conference and the event in Purcell, stated that the “crisis of affordable housing” in the United States drives Habitat’s work. “We are hoping, this week, not just to have a great impact here but to shine a spotlight on that need, remind everyone how critical it is to have a safe, decent, affordable home.”

The palpable idealism of the Habitat executives and volunteers shone through not only in their official statements, but also in their actions. The constant, cheerful sound of hammers, music blaring from radios and the conversations of blue-helmeted volunteers permeated Habitat’s Mishawaka worksite. Bright pink lawn flamingos inscribed with messages to recipient families stood cheerful guard in front of the new houses, as did rolls of grass waiting to be planted.

Habitat for Humanity, according to President Carter, is “not a charity” in the traditional sense: recipient families “pay” for their houses through hours of sweat equity, time spent building their own (or someone else’s) house. Nor does Habitat’s sweat equity system exclude those physically unable to work: people with disabilities can earn their “hours” in Habitat’s stores or offices. Even children can contribute by performing well in school. This business model ensures that recipient families take pride in their homes and feel empowered to take up active roles in their communities.

Although the Carter Work Project itself concluded on Aug. 31, Habitat for Humanity has not yet finished its work in St. Joseph County. The Mishawaka work site will welcome more volunteers later this fall for its Women Build Week, during which they will add some finishing touches to the newly-built homes. Anyone in the community, Notre Dame students included, may sign up.

“It was a privilege for members of the Notre Dame student chapter to participate in the Carter Work Project,” Andrew Herbst, president of Notre Dame’s chapter of Habitat for Humanity, said. “To work alongside the Carters and to witness the complex operation of constructing houses with the 23 future homeowners is an experience that leaves a lasting impact on us as participants, as well as the community. We’re excited for the rest of the school year during which we’ll help to finish the incredible progress begun by over 700 volunteers during the Carter Work Project.”