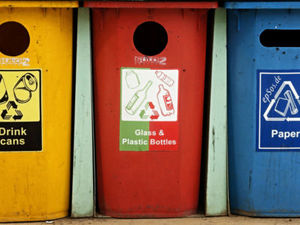 If there’s one place on campus where a small change can spark controversy, it’s the dining hall. This year, students returned to campus and discovered both North and South Dining Halls swept clean of paper waste. The Office of Sustainability, Notre Dame Food Services (NDFS) and student government teamed up to eliminate Styrofoam cups and paper Grab ‘n Go bags from both dining halls.

Why does this matter?

Polystyrene, the chemical name for Styrofoam, “cannot break down in the environment, so it frequently is relegated to landfills where it sits for decades,” according to the Office of Sustainability.  “It is produced from non-renewable fossil fuels and certain chemical inputs are frequently considered to be carcinogenic.”

“We serve over two million meals at the dining halls each year,” Marc Poklinkowski, general manager of South Dining Hall, says. “So if we make a move like this to divert waste from a landfill, it can make a significant impact.”

Grab ‘n Go bags. The change, however, has left students with mixed emotions and the need for increased creativity. Several students said that when they answered the poll, they assumed compostable paper cups would replace the Styrofoam.

“The elimination of Styrofoam cups makes it impossible for me to enjoy a post-dinner cup of fro-yo while walking out of the dining hall, which has been one of my favorite ND dining hall traditions,” senior Alison O’Connor says.

But with new challenges, the change brings perks as well. With the money saved on purchasing cups and bags, NDFS now purchases milk and yogurt from Prairie Farms, a local milk co-operative, and is considering buying more local produce. Gluten-free sandwiches have been added to the Grab ‘n Go menu, and the new make-your-own burger and mac-and-cheese nights at South are made possible by the extra funds.

The plans to improve the university’s eco-footprint continue. Later this fall, NDFS and the Office of Sustainability will launch a post-consumer food waste recovery program.