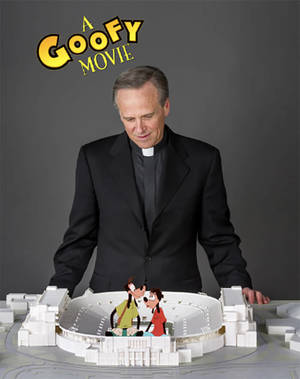 Disney recently released a trailer for its latest live-action movie remake; this time, the entertainment company is remaking “A Goofy Movie.” The sure-to-be blockbuster will star none other than Rev. JayJay I. Jaykins, C.S.C. as the main character, Max. Fr. Jaykins scored the role with no previous acting experience after a generous donation of 60% of the University of Notre Dame’s endowment.

The money was offered after a lengthy meeting with the Board of Trustees, who concluded that the film could be useful promotional material for Notre Dame and a novel approach to increasing vocations to the priesthood. As a result, the film’s plot will stray significantly from the original storyline. Instead of a story about a teenage son’s road trip with his embarrassing father, the remake will chronicle a young man’s vocational journey to the priesthood — referred to as a “road trip with God” by Jaykins in an exclusive interview with Oprah — with the movie’s final scene showing young Max’s first celebration of the Mass.

According to the film’s director, Regis Philbin, not only will Fr. Jaykins play the role of the main character, but also every other character in the movie. Due to his increased public profile, he has refused several interviews with Scholastic, always accompanied by the instruction to “speak with [his] agent,” which is actually the entire Board of Trustees.

The Board indicated that the movie would be released in the summer of 2018, as it is currently in the middle of production. “Honestly, though, we’re not totally sure,” one board member reported. “You never know how long a project is going to take.” Another chimed in, “Yeah, I mean, look at Crossroads. That was supposed to be done a decade ago, and it’s still not open.”