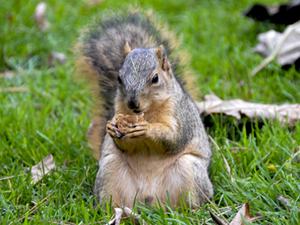 I am not and never was the skinniest squirrel on campus, but I did not used to be obese. When I first arrived on campus, I was overwhelmed by the unlimited amount of nuts lying everywhere. Luckily, I preferred the nuts on South Quad, so I worked off those Omega-3’s by scampering up trees and over branches to get from PaSquirrella to the tasty trees on South.

I’ve always been a planner (and a bit of a hoarder), so before winter rolled around, I started stockpiling. I had quite the collection. By November, I started categorizing by flavor and then started some culinary experiments. Half-eaten Chipotle with some sprinkled sunflower seeds was my guilty pleasure.

Once it became too cold for me to venture out and about, I stowed away in my cozy hole and napped. Then I became bored and snacked.

I munched in the morning and nibbled at night. I didn’t see my other squirrel friends who had likewise immigrated to the hiber-nation, so I didn’t bother to watch my figure. I watched Netflix instead.

When I started to hear worms chewing through the leaves outside, I knew spring had almost arrived. Instead of being excited to venture out and about, I panicked. I was fat! I was a fat squirrel. I didn’t want my squirrel friends to see me this way, especially with SYR season coming up.

I tried to do some crunches to tighten up my abs, but the word crunch reminded me of Nestle Crunch bars and Captain Crunch cereal, and I’d just start snacking again. I decided working out on my own was not going to get the job done.

I didn’t want to go to exercise classes because my squirrel friends would see me there and know that 1) I was fat, and 2) I was trying not to be fat anymore. If I was fat, I would rather they thought I was fine with it instead of knowing I was trying to work it off.

Then, I stopped and asked myself, “Why am I so upset about being fat? Why did I care what other squirrels thought of me?” I should just pretend the other squirrels were like the students I see around campus. I didn’t give an acorn about what they thought.

So, I did what any reasonable squirrel would do. I became an edgy squirrel.

I trimmed my tail-hair into a Mohawk and rolled around in the Drip ‘N Dodge paint to give it some color. I worked on my sassy scamper. I ate more acorns.

When I met up with my squirrel friends, they didn’t comment on my new look. I’m not even sure they noticed. I was actually kind of insulted. I had put a lot of work into revolutionizing my look.

That was when I realized the other squirrels didn’t care at all what I looked like. They were too busy grooming their own tails and having Twitter fights with the birds who claimed only they could Tweet.

I learned to accept who I am and do what I want because other squirrels don’t really care what I look like or what I do anyways. I am an obese squirrel, but a happy squirrel.