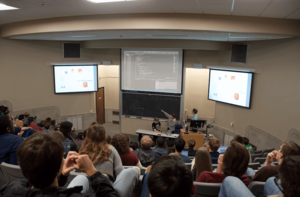 Notre Dame, in conjunction with outside sponsors, hosts countless academic competitions each year — including essay contests and case study competitions — in business, the sciences and more. Computer science and engineering students took part in their own competition between Nov. 2-4, during which the AT&T-sponsored Irish Hacks took place. During this multi-day competition, students vied for monetary awards ranging from several hundred to several thousand dollars. Coding for hours during the day (and sometimes well into the night), teams had less than 48 hours to develop an app, a three-minute elevator pitch and a presentation detailing the app’s features.

“My ACM officers and I were inspired to host this hackathon because hackathons have been extremely formative learning experiences for us,” said Kelly Dodson, a senior computer science major and president of the Association for Computing Machinery, said. “We wanted to share this amazing learning opportunity with our fellow Notre Dame students.”

In this year’s hackathon, 16 teams competed for a range of awards. Prizes went to teams with exceptionally innovative ideas — such as using crowdsourcing and artificial intelligence to create an app designed to connect Notre Dame students with various causes — with two-person team OnCork taking the $2,000 grand prize. Other entries dealt with a variety of social, educational, medical and technological issues. One app aimed to reduce hospital transport inefficiency; another used QR codes to detect adverse reactions between medications. Other entries dealt with problems commonly encountered by college students: One proposed app used motion detection technology to show office hour availability, and another — aptly titled StudyJam — harnessed text-to-speech technology to set students’ vocabulary terms to music.

Still, other apps made use of features such as IBM Watson and Google Maps to solve everyday problems. One team created a special parental control app that screened videos for negative emotion and inappropriate content; another app aimed to help users find parking in crowded locations.

“The hackathon was a huge success thanks to the support of Dr. Patrick Flynn, Dr. Tim Weninger, AT&T, IBM, Pariveda Solutions, Deloitte and other student clubs,” Dodson added. “By the end of the weekend, 16 teams were able to successfully develop impactful and unique software projects.”

*Correction: An earlier version of this article misstated the winner of the grand prize. The team that won the $2,000 grand prize was OnCork, not Underdogs.