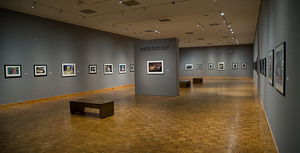 Just this morning, the news broke that Notre Dame’s Snite Museum of Art, one of the premier Notre Dame museums of art, is not what we thought. Once an innocent gallery full of ... art, probably. Nobody’s ever actually been, so we can only postulate what once bedecked those beige halls. Anyway, it has been uncovered that those echoing galleries have been bedecked in FRAUD.

What staff members thought were expensive works of art were actually all just Google images, printed out and hung up by none other than the king of the South Bend underworld: Rev. JayJay Jaykins, C.S.C. Jaykins has reportedly been using the “museum” as a front for money laundering. That’s right, Jaykins has been washing, drying and folding money all under our oblivious noses.

Records indicate that Jaykins has used the money to build himself a 2-to-1 scale replica of Jaykins-Nanovic on a plot of vacant land in lower Nebraska, this time without the Nanovic. He has since been spending his time lording over his lands while a convincing body double does his work around campus.

Students and staff report the news as alarming but not that surprising. “I noticed something was off when we made eye contact: There were blueprints next to his chair,” one student reported after Mass this past Sunday. Plans for the Snite remain in the hands of God — it will be abandoned and nature will slowly crawl back in until it has fully reabsorbed into the Notre Dame ecosystem.