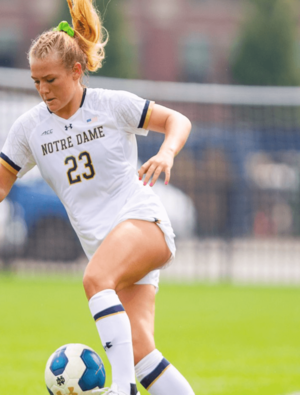 The Notre Dame women’s soccer team had high expectations last year, but a combination of youth and a difficult schedule led to a disappointing season that saw the Fighting Irish finish 8-10 overall, 4-6 in the ACC and without a post-season appearance.

Although Head Coach Nate Norman’s first season at the helm did not go according to plan, the Fighting Irish are looking to build on a hot start and finish strong in hopes of returning to the NCAA Tournament.

The women’s soccer team at Notre Dame has built a tradition of success over the last few decades, winning national championships in 1995, 2004 and 2010. This year’s squad is looking to build on that tradition and return to national relevance in the most competitive conferences in women’s soccer. A good way to put the country on notice is to start the season on a six-game winning streak, a feat that the Fighting Irish have accomplished thanks to major wins over Northwestern and Michigan.

The 6-2 record has been fueled by a combination of incredible defense and a plethora of goal scoring options on the offensive side. Through the first six games, the defense had only allowed one goal and has looked as fierce as ever each time they take the field. Sophomore goalkeeper Mattie Interian has kept opponents off the scoreboard, racking up 11 saves in the process, while senior goalkeeper Brooke Littman has contributed five more. While the defense has held firm, the offense has had no trouble putting the ball in the back of the net.

Across just six games, 10 Notre Dame players have already managed to score at least one goal. Junior forward Eva Hurm and sophomore midfielder Luisa Delgado are currently tied for the team lead in goals with three. Graduate defender Autumn Smithers and sophomore midfielder Sammi Fisher are not far behind with two goals apiece. The highest offensive outputs came at home against Northwestern and St. John’s when the Fighting Irish put up four goals in shutout victories. Moving forward, Coach Norman will lean on a more experienced offensive side of the ball to continue notching up goals.

As Notre Dame looks ahead to conference play, beginning at Clemson on Sept. 20, they cannot allow a hot start to take their minds off the prize; a return to the NCAA Tournament and national relevance.

Before postseason play begins, the women must brave four more road games against teams currently ranked in the Top 25 (including No. 1 North Carolina and No. 4 Virginia), while trying to defend their home turf against a Wake Forest squad that is also currently ranked. Nobody said it would be easy to regain prominence, but it is obvious that the Notre Dame is ready to compete.