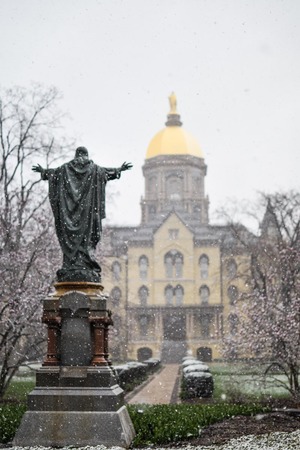 Senior and proud Minnesotan John McNeill was seen walking around campus in shorts, a bro-tank and flip flops in late January after second semester started off with a heat wave.

“Like I said, I’m from Minnesota,” McNeill added as our reporter was already briskly walking away.

Highs were in the mid-30s to mid-40s at the end of January, but it’s expected to cool down by about five degrees moving into February.

“She’s wearing a Canada Goose coat with the hood up, two hats and at least four wool scarves, so I don’t know if you’ll be able to understand what she’s saying through all the layers,” Stevenson said. “She’s from California and finally saw The Revenant last week, so I think she’s concerned about getting stranded on South Quad or being mauled by a bear or something.”

Murray appeared to nod in confirmation. The layers, however, covered her entire face, so she might have been sneezing.

“I tried to tell her that she’d be fine in a black North Face and Uggs or a cozy Patagonia fleece with some L.L. Bean Duck Boots. I was afraid she’d sweat through all her clothes, but she insists on bundling up,” Stevenson said.

“At least I convinced her that she didn’t need to wear two pairs of leggings,” she added. “I told her she probably doesn’t need to wear sunglasses to protect against snow blindness because there’s neither snow nor sunlight.” Later that day, Murray was seen nervously looking from side to side before hastily donning a pair of UV-resistant sunglasses.