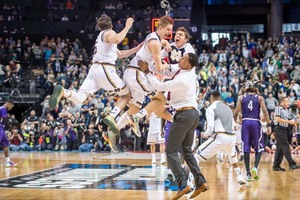 Before the 2014-15 season, Mike Brey had never reached the Elite Eight as a head coach, and Notre Dame had not been since the 1978-79 season under Digger Phelps, when the Irish were still independent. Brey has since guided the team that far in two consecutive NCAA Tournament appearances, losing to Kentucky in 2015 and North Carolina in 2016.

The last time Notre Dame reached two consecutive regional finals, the Irish took a step back in the third season. In 1977-78, Phelps led the Irish to a 23-8 record and defeated DePaul in the Elite Eight before losing to Duke by four points in the Final Four. Phelps followed that with a 24-6 record in 1978-79, ultimately falling to Michigan State in the Elite Eight. Trying for a third straight Regional Final in 1979-80, Phelps’ Irish lost in the second round of the NCAA Tournament.

What gives Brey the confidence that his squad can turn history around and make an unprecedented third straight run at March magic, especially after losing guard Demetrius Jackson and center Zach Auguste to the NBA?

“There’s no question in that locker room, I don’t have to talk about goals,” Brey said at his annual media day press conference on October 18. “This group of guys talks about playing past the Elite Eight, that’s awesome when your culture kind of generates that kind of leadership and tone without me getting involved.”

The Irish will put out a very experienced starting lineup when they take the floor on November 12th for their first regular-season game against Bryant. Barring any late changes, all five starters will be upperclassmen: junior Matt Farrell at point guard, seniors Steve Vasturia at shooting guard and V.J. Beachem at the wing, and juniors Bonzie Colson and Martinas Geben occupying the two forward positions.

Rex Pflueger, a sophomore known especially for his defense, will be one of the first guards coming off the bench, as will freshman T.J. Gibbs, a fourstar recruit from Scotch Plains, New Jersey. Sophomore Elijah Burns and senior Austin Torres will be two reserve forwards whose size Brey will rely on heavily throughout the season, and sophomore Matt Ryan will provide three-point shooting help once he recovers from a stress reaction in his left foot.

“We’re deep, we have a lot of experience, so we’re excited to get back on the court and play for you guys, and play with a lot of heart and passion,” said Colson to a crowd at the first annual Ball Out at the Bookstore event on October 10. “It’s going to be another great year.”

Last year, the Irish went a sterling 16-0 at home, ultimately reaching a final record of 33-2, dropping only one regular season game to the University of Connecticut, the eventual national champions for a fourth consecutive year. In 2015-16, the Irish won both the ACC regular season and tournament championship for the third year in a row. They did this while outscoring their opponents by 657 points, averaging a margin of victory of about 18.8 points per game, shooting for an overall average of about .496.

While many teams lost, the Irish gained, both in recruits and in experience. Senior point guard Lindsay Allen and junior forwards Brianna Turner and Kathryn Westbeld are the three starters returning this year. Notre Dame also adds two nationally-touted freshmen — Erin Boley and Jackie Young — along with sophomore Ali Patberg, who missed last season due to injury.

Allen will captain the team for her third consecutive season. In each of the last two seasons, she has been named a finalist for the Nancy Lieberman Award, given to the nation’s best point guard, and she is on the “watch list” for the award once again as a senior. In her first three seasons, Allen has tallied 559 assists, more than any player in school history and second among active NCAA Division I players. She averages 4.99 assists per game.

Turner looks to build on a career that has already earned her All-American honors. The 2016 ACC Defensive Player of the Year ranks second in school history for career field-goal percentage (.624) as well as for career average blocks per game at 2.72. Turner has been heralded by many as the best forward in women’s college basketball, and with two seasons left to play, the sky is truly the limit.

With this being Coach Muffet McGraw’s 30th year in charge of the Fighting Irish, the season was already set to be a special one. This looks to be one of the strongest Irish teams ever assembled. Hopefully, it can be a historic one as well.