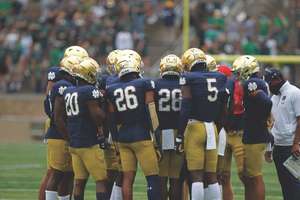 It was a matchup that was supposed to happen on Sept. 26 at Wake Forest, but because of COVID-19, the game was rescheduled to Dec. 12. Unfortunately, seven Notre Dame football players tested positive for the virus several days before the originally scheduled game, which resulted in the isolation of 13 players. Furthermore, the Notre Dame football program wanted to ensure the safety of the rest of its players, so it paused all football-related activities for several days. Head coach Brian Kelly stated that “with student-athlete health and safety our primary focus, we will continue to follow our prevention protocols and ongoing testing procedures.” In the meantime, it was time for the team to redirect its attention to the upcoming game against Florida State.

Fast forward to the beginning of December: the team had managed to win all of its scheduled games and ultimately clinch its spot in the ACC Championship. As the Irish prepared for an upcoming home game against Syracuse, though, that following game against Wake Forest was canceled. Therefore, all they had to do was secure a final victory against Syracuse and prepare for the ACC Championship.

What seemed to catalyze the cancellation of this game was the fact that Clemson’s head coach Dabo Swinney was outspoken about playing Florida State on the rescheduled date of Dec. 12 after the postponement of their game that was originally scheduled for Nov. 21. Therefore, the ACC established a rearranged schedule in which Clemson had a bye on Dec. 12. The new schedule didn’t include the game between Notre Dame and Wake Forest. Kelly said that “there needs to be balance. Everybody has to play everybody.” A bye on Dec. 12 for both teams would ensure fairness while granting them more time to prepare for an exciting rematch. After all, the change in schedule would have granted Miami the opportunity to play in the championship game if they could beat North Carolina and witness an upset victory by Virginia Tech over Clemson. However, Miami lost to North Carolina, and Clemson was victorious over Virginia Tech. After Notre Dame won its regular season finale against Syracuse, the rematch against Clemson was set for the ACC Championship.

Unfortunately, the COVID-19 pandemic and the health concerns it raised caused a handful of college football games to be postponed or canceled. In fact, the postponement of the Nov. 21 game between Clemson and Florida State was due to COVID-19 concerns. This season will be a season that many will remember with mixed emotions and opinions, a season Notre Dame joined the ACC, played in its first conference championship and secured a College Football Playoff berth.