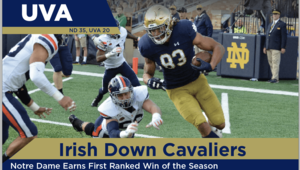 Eager for a win following the heartbreaking 23-17 loss at Georgia the week prior, the No. 10 Notre Dame Fighting Irish gained some momentum with a decisive win over the visiting No. 15 Virginia Cavaliers. Despite trailing by three going into the half, the Irish outscored the Cavaliers 21-3 in the third quarter and maintained control throughout the second half, notching a respectable 35-20 win over ranked UVA.

The Cavaliers hit the ground running in the first quarter, scoring a touchdown within the first four minutes in just seven plays. The Irish quickly found themselves playing a game of catchup, but senior running back Tony Jones Jr. put the Irish on the board with a 5-yard rushing touchdown to even the score at 7 apiece.

With just two minutes left in the first quarter, senior defensive end Julian Okwara forced and recovered a fumble to give the ball back to the Irish. In less than two minutes, Ian Book completed passes to Chase Claypool, Cole Kmet and C’Bo Flemister to march the ball down the field. Flemister then finished off the drive with a beautiful 11-yard rushing touchdown.

Virginia responded with a 32-yard field goal and scored a quick touchdown on a 16-yard reception from Hasise Dubois. Notre Dame failed to score on their next three possessions in the second quarter, as they muffed a 47-yard field goal and were forced to punt twice, which meant they were facing a three point halftime deficit.

The Irish defense stepped up in the second half, holding the Cavaliers to  a field goal. Midway through the third quarter, senior Jamir Jones sacked and stripped Virginia’s Bryce Perkins of the ball and junior Myron Tagovailoa-Amosa recovered it midair, sprinting downfield for a 47-yard recovery to the Virginia 7. Tony Jones Jr. added another touchdown to the board with a 2-yard run. With that defensive onslaught, the Irish regained the lead and never looked back. At the end of the third quarter, Okwara sacked Perkins and forced a fumble yet again, which was recovered and returned by Adetojunbo Ogundeji for a 23-yard touchdown.

Notre Dame’s defensive linemen finished the game with an impressive eight sacks and held Virginia to just 4 rushing yards. The Irish picked up five turnovers against the Cavaliers ­­­— forcing three fumbles and two interceptions — and helped make a statement that Notre Dame could still be a playoff contender.

The 35-20 win marked the 900th win in Notre Dame program history, joining an elite group of just eight football programs. Having defeated their first ranked team of the season, the Irish looked forward to the following week’s home game against Bowling Green as an opportunity to regroup.