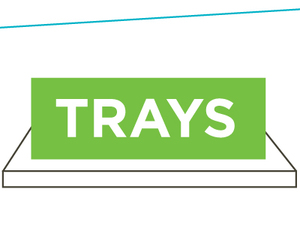 On Oct. 29, the dining halls at Notre Dame held a trial run to test out not using trays for a day. The intentions — to conserve water, save money and reduce excessive food waste — may have been admirable, but the overall effect was nothing short of disastrous. Just ask any student who had to endure going trayless for a day — students need trays, and going without them is inefficient and messy.

“They tried to get us to not use trays for one day, and people couldn’t even manage that. It wouldn’t work if they installed it permanently,” sophomore Brigid Walsh says.

Students found it difficult to manage their food without trays. Many struggled to balance carrying several plates, bowls, utensils and drinks all at once through the dining halls, while others were forced to make multiple trips back and forth from their tables to the food stations in order to avoid dropping food off of over-crammed arms. The result was often extended time spent in the dining halls and slight over-crowding from backlogged, time-consumed students.

“It was a pain the other day when we didn’t have them,” sophomore Sabrina Singh says.

Even without trays, many students noted that they would still use several plates and bowls, voicing the opinion that going trayless would not cut back on water use and food waste significantly.

Sophomore Madeline Hagan says that she wants the dining halls to keep trays “so that I can get more food.”

The inconvenience of having to carry several plates may not just be annoying — for some, it may be a necessity.

“Keep the trays! And if you have a wheelchair, you need a tray. They serve a purpose,” Singh says.