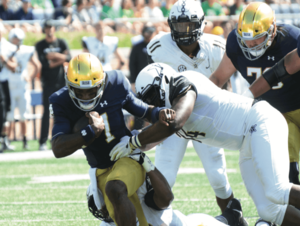 After week two’s tougher than expected victory over Ball State, the No. 8 Fighting Irish were eager for a win against the then- undefeated 2-0 Vanderbilt Commodores.

The Irish had a stellar first half, opening the game with a 26-yard field goal by Justin Yoon just four minutes in and scoring on the opening drive for the third straight game. Wimbush ended the first quarter with a 12- yard touchdown run which put the Irish up 10-0. After several three-and- outs by both teams at the start of the second quarter, senior kicker Justin Yoon made a 33-yard field goal to make it 13-0. Later in the quarter, the Commodores were driving downfield when junior safety Alohi Gilman knocked the ball out at Notre Dame’s 1-yard line. Junior cornerback Julian Love scrambled through the end zone and fell on the ball for a touchback, keeping Vanderbilt off the scoreboard.

Following Vanderbilt’s fumble, Notre Dame marched downfield and capped the drive off with a 46-yard field goal by Yoon. After a series
of incomplete passes by the Commodores, kicker Ryley Guay secured Vanderbilt its first three points with a 21-yard field goal with no second left to spare, ending the half with a 16-3 Notre Dame lead.

Despite an impressive performance in the first half, the second proved to be more of a challenge for the Fighting Irish as the third quarter almost ended in a stalemate. With under seven minutes left in the quarter, junior cornerback Troy Pride Jr. intercepted a pass from Vanderbilt’s Kyle Shurmur, but Notre Dame failed to capitalize on the turnover. Vanderbilt finally scored its first touchdown with only 11 seconds left in the quarter on a 3-yard run from running back Ke’Shawn Vaughn. Wimbush started the fourth quarter driving downfield and setting up junior quarterback Ian Book to enter the game and and connect on a two-yard touchdown pass to graduate student tight end Nic Weishar. Book attempted a two- point conversion but it was unsuccessful.

On the following possession, Shurmur completed an 18-yard pass to Jared Pinkney for the final touchdown of the game. Despite solid runs by junior running back Tony Jones Jr. and Wimbush, Notre Dame failed to widen the scoring margin after an uncharacteristic missed field goal attempt by Yoon. Notre Dame’s consistently strong defense held Vanderbilt at 17 points for the rest of the quarter, allowing the Irish to finish the game 22-17, moving to 3-0 on the young season.

The Vanderbilt game featured stellar performances from several players. Jones had a career high of 118 yards rushing and Wimbush added 84 yards on the ground. Jones said after the game that he felt like he was “in high school again. Getting a lot of carries, just repping.” Graduate student punter Tyler Newsome received the game ball for beating Notre Dame’s record for a single-game punting average, with all five of his punts travelling over 50 yards and often putting the Commodores behind their 20 yard line.

Notre Dame’s 22-17 win pushed forward what would be a season- long winning streak, setting the Irish up for their first road game of the season against Wake Forest in Winston Salem, North Carolina. Little did Notre Dame know that a change in its starting lineup against the Demon Deacons would be the spark that fueled the program’s first-ever appearance in the College Football Playoff.