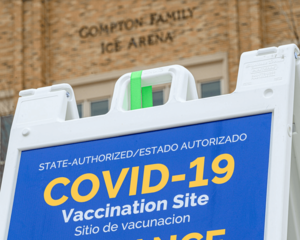 This March marked one year since the university community received an email from Rev. John I. Jenkins, C.S.C. announcing that students would not return to campus after spring break, and would instead finish their classes virtually from home, due to the overwhelming rise in COVID-19 cases around the world. For most, the past year has consisted of masks, hand sanitizer, six feet of separation and endless references to these “unprecedented times.” But many health officials seem to think that the end may be in sight.

On March 2, the Indiana State Department of Health announced a mass vaccination initiative at three different locations throughout the state, including the Compton Family Ice Arena at Notre Dame. The site was open on March 26  and 27 from 8:00 a.m. to 8:00 p.m. and an estimated total of 5,760 individuals received the single-dose Johnson & Johnson vaccine.

Dr. Mark D. Fox, deputy health officer of the St. Joseph County Department of Health, has worked closely with university officials throughout the pandemic and collaborated with the state health department to organize the vaccination event. He explained that Notre Dame was an ideal location for the event because of its high indoor capacity limits, the large number of parking spots and its nationwide prominence.

According to state guidelines, only adults aged 40 years or older were eligible to receive the vaccine during this time. The Indiana State Department of Health also limited this opportunity to residents of Indiana, despite the proximity of Notre Dame to the state border and the fact that many of the university’s faculty members reside in southwest Michigan.

“Initially, anyone who lived or worked in Indiana was eligible. And then they restricted it to only

Indiana residents, which doesn’t affect Indianapolis in the same way that it affects the border communities,” Fox explained. “I think it’s really unfortunate.”

specifically designed for mass vaccination efforts. Using information from doctor’s offices, pharmacies and insurance companies, it automatically populated the patient’s demographics and medical history, and created an appointment. This system not only made registration easier, but also provided important documentation for the state.

The site was open for two 12-hour days, with an optional third day depending on the initial success and reception. Despite filling all of the appointments more than a week ahead of the event, the third day was never added. According to Fox, the State Department of Health had to limit the number of appointments due to the nationwide shortage of vaccines.

Some members of the Catholic community, however, expressed concerns about the ethicality of the Johnson & Johnson vaccine. The new single-dose vaccine uses a cell line that originated from an aborted fetus during the testing and production processes, while Pfizer and Moderna only use such cell lines during their testing phases.

In a March 2 statement issued on behalf of the U.S. Conference of Catholic Bishops, Bishop Kevin Rhoades of Fort Wayne-South Bend encouraged Catholics to avoid the Johnson & Johnson vaccine if possible.

“If the Moderna or Pfizer vaccine is available,” he wrote, “Catholics should choose to receive either of those vaccines rather than to receive the new Johnson & Johnson vaccine.”

Two days later, however, in a video posted to YouTube, he clarified that “there’s no moral need to turn down a vaccine, including the Johnson & Johnson vaccine, which is morally acceptable to use,” a position which aligns with recent statements from the Vatican, which held that, given the extreme circumstances of the pandemic, Catholics should strive to receive any form of the vaccine. Notre Dame officials have also echoed this position.

Health officials around the world agree that immunization is likely the only solution that will allow COVID guidelines to eventually ease, and college-age adults across the nation are expected to become eligible in the coming months. While vaccination efforts have been successful in the Notre Dame community so far, Fox is worried that younger individuals, including college students, “will not feel a sense of urgency or a great motivation for getting the vaccine.” He explained that appointment rates have slowed since the age of eligibility has started to drop.

Fox remains hopeful that college communities will eventually become hubs for vaccination efforts, just as they have with flu vaccines. He explained that it’s a race against the clock to get university students vaccinated in order to avoid the development of variants of the virus.

“We’re eager to get students included as soon as we can,” he said. “Our hope, fingers crossed, is that in April, we’ll have enough doses available, and we’ll be able to get it into students before they leave.” If things go to plan, Fox’s wish should come true as Gov. Eric Holcomb announced March 23 that Hoosiers of 16 years of age and older, including college students, will be eligible for the vaccine beginning March 31.