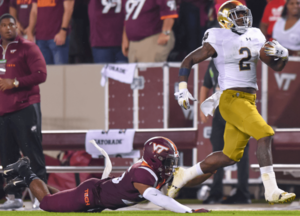 One week after a dominant home victory against then-No. 7 Stanford, the Irish traveled to Blacksburg, Virginia, to take on Virginia Tech. The game marked the first true road test for Notre Dame, as the hostile crowd at Lane Stadium is notorious for disrupting visiting opponents, especially after dark.

The primetime showdown against the Hokies also marked a rematch of 2016, as the Irish looked to redeem their 34-31 home loss and improve to 6-0 — a record that would illustrate significant progress from the lackluster 2016 season.

Heading into the game, there were many questions about the Hokies’ quarterback situation, including whether junior transfer Ryan Willis could get the job done in his second start following starter Josh Jackson’s injury two weeks prior. The quarterback slot for the Fighting Irish was also a big topic of discussion throughout the week, with junior Ian Book coming into his third game with 603 passing yards and nine total touchdowns in his previous two starts.

The top-25 matchup between Notre Dame and Virginia Tech warranted a primetime start, and by 8 p.m. on Saturday night, the nearly 66,000 in attendance at Lane Stadium were as loud as ever. Following the warmups and the Hokies’ famed “Enter Sandman” entrance onto the gridiron, Virginia Tech won the coin toss and elected to defer.

In the opening drive, the Irish offense showed its strength with an impressive march down the field. Ian Book connected with senior wide receiver Miles Boykin for an 18-yard first down, and later moved the chains with a 16-yard reception by senior tight end Alizé Mack. Junior wide receiver Chase Claypool was targeted three times in the opening drive and caught all three passes from Book. The 12-play, 75-yard drive was capped off with a 1-yard touchdown run

by senior running back Dexter Williams, and the Irish quickly took a 7-0 lead. Willis and the Hokies looked to respond on the next drive, but to no avail as the Irish defense turned the possession into a quick three-and-out. On the ensuing drive, a 56-yard reception by senior wide receiver Chris Finke set up a 31-yard field goal by senior kicker Justin Yoon, which put the Irish up by 10 midway through the 1st quarter.

Virginia Tech matched Yoon’s effort during its next possession and narrowed the gap to seven points after a 39-yard field goal by Brian Johnson.

After a fumble, an interception and a punt in Notre Dame’s next three possessions, Johnson and the Hokies were able to capitalize with two field goals which cut the deficit to a single point. The score read 10-9 in favor of the Irish with a minute to play in the half.

With the Hokies in possession of the ball after the Notre Dame punt, quarterback Ryan Willis was sacked by junior defensive end Khalid Kareem, leading to a fumble and a 42-yard scoop-and-score by junior cornerback and All-American Julian Love, who sprinted to the goal line untouched.

On the final possession of the half, the Hokies pieced together an eight- play, 75-yard drive in 56 seconds — ending with a 3-yard Damon Hazelton touchdown reception — to make the score 17-16 at halftime.

Though the Hokies received the ball after the break, they were unable to transfer the momentum from the previous quarter and punted after a solid stand by the Irish defense. The punt was downed at the Notre Dame 5-yard line, and a 2-yard loss by Williams backed up the Irish even further into their own territory.

On the next play, the coaching staff called Williams’ number again, this time on a handoff to the near sideline. The offensive line opened up a huge hole, allowing Williams to bolt 97 yards to the end zone, a massive blow to the Hokie faithful at Lane Stadium. The 97-yard touchdown run was the second-longest run play from scrimmage in Notre Dame history, just behind Josh Adams’ 98-yard dash in 2015.

From there, the Irish took complete control of the game. In their next three possessions, Book connected with Boykin twice for touchdowns, one for 40 yards and the next for 5. The Hokies were unable to tack on any points in the third quarter, leaving the score at 31-16 going into the fourth. Willis and Virginia Tech were only able to muster one more score, coming on a 15-yard touchdown reception by Eric Kumah. However, the Hokie sideline had little to celebrate, as the impending loss worsened with two Notre Dame scores in the final quarter — ending with another explosive touchdown run from Williams for 31 yards.

In all, the Irish ended with 438 total yards, 271 of which came through the air from Book. Williams finished the game with three touchdowns and a whopping 178 rushing yards, Boykin with 117 yards receiving and two scores. Senior linebacker Te’von Coney, who had nine tackles, led the defense in the Irish’s dominant 45-23 win in Blacksburg.

With a big road win under their belt and sitting at 6-0, the confident Irish squad turned their attention to their showdown with Pitt in South Bend the following week.