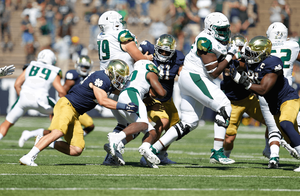 “If [you were] expecting that we were going to come out like a shiny new car, [you’ve] been reading too much internet chatter,” Kelly said.

Given the circumstances: a new offensive coordinator, brand new offensive skill position starters across the board, and limited offseason practices, it was unrealistic to expect the Irish offense to come out firing on all cylinders in their first game. With that being said, as No. 7 Notre Dame prepared for another home contest against the University of South Florida, there were still plenty of questions to be answered.

Things got more difficult though, when Kelly watched his roster dwindle days before kickoff against USF. The team announced that eight players – Kyle Hamilton, Shayne Simon, Marist Liufau, Lawrence Keys, Ovie Oghoufo, Jahmir Smith, TaRiq Bracy and Brendon Clark – would be unavailable against the Bulls. Hamilton was out due to injury; the reason for the others wasn’t provided.

It seemed as though the headline would be about who wouldn’t play for Notre Dame, until the game actually started. Everyone who needed to step up on short notice did so and then some, and the Irish (2-0, 1-0) coasted to a 52-0 blowout victory in front of 10,085 over the Bulls (1-1).

Again, it was the run game that carried Notre Dame behind one of the best offensive line units in the entire country; all six Irish offensive touchdowns came on the ground. Junior C’Bo Flemister led the way with 127 yards and a score, while freshman Chris Tyree and sophomore Kyren Williams continued to impress. Both rushed for over 60 yards and Tyree picked up his first career touchdown. Plus, Ian Book became the first Notre Dame football quarterback in the modern era to run for three touchdowns in one half, all on short keepers.

In the season opener, it was Williams who stole the show offensively. Against USF, sophomore linebacker Jack Kiser made waves on defense. Kiser, who went from the scout team midweek to the starting lineup Saturday, ended up leading the Irish with eight tackles and two tackles for loss. His performance earned him the game ball. The Notre Dame secondary was also impressive.

Against Duke, Bracy and graduate transfer cornerback Nick McCloud led the team in defensive snaps played. Against USF, the team was down Bracy and Hamilton, and McCloud was playing limited snaps, which meant much more playing time for freshman Clarence Lewis, sophomores KJ Wallace and Cam Hart and juniors Houston Griffith and DJ Brown. USF had just one completion of 20 yards or more and 125 passing yards total split between three different QBs. Griffith and Lewis, who were emergency starters like Kiser, tied for second on the team with five tackles each.

Unfortunately for Notre Dame, the passing woes continued for third year starter Book against a bad Bulls secondary. Book finished 12 of 19 for 143 yards through the air. Wide receivers accounted for just four catches and 41 yards total, even with the return of junior Braden Lenzy.

Junior tight end Tommy Tremble led the team in receiving for the second straight week with three catches for 60 yards. After two weeks, it seemed clear that Notre Dame needed more at receiver if they wanted to make a title run.

Notre Dame wasn’t at full strength and still managed to pull out a 52-0 win, its 20th consecutive win at home. While the team may not have been close to where it needs to be for when Clemson comes to town in early November, Saturday revealed a team willing and able to step up to the challenge from top to bottom.