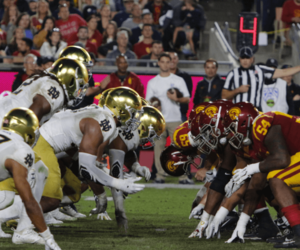 The stars were aligning. The No. 3 Notre Dame Fighting Irish stood at 11-0 and one win away from their first berth in the College Football Playoff. Just like in 2012, the Irish had to finish the regular season in the Los Angeles Coliseum against their rival, the 5-7 USC Trojans.

“It’s just like any other week,” head coach Brian Kelly said to ESPN’s Maria Taylor before the game. In many ways, though, it wasn’t.

The matchup was the 90th between the two storied programs, with the Irish leading the all-time series 45-37-5 (includes two vacated Notre Dame wins). Notre Dame had also won the most recent game against USC with a resounding 49-14 victory against the then-No. 11 Trojans.

Just two days after Thanksgiving, Notre Dame looked to start a winning streak against its biggest rival and win at the Coliseum for the first time in six years.

On paper, the Irish seemed to have every advantage. With a stout defense and steady offense, Notre Dame entered the game as 14-point favorites, fresh off a 36-3 pummeling of No. 12 Syracuse at Yankee Stadium.

The Trojans threw everything they had at the Irish. USC started with the ball, and freshman quarterback JT Daniels started throwing. The Trojans’ first seven plays from scrimmage were all pass plays, and six were completions. Freshman wide receiver Amon-Ra St. Brown, younger brother of former Notre Dame receiver Equanimeous St. Brown, caught four passes for 45 yards on the first drive. On first-and-10 from at the 14-yard line, sophomore running back Vavae Malepeai bolted to the end zone on his first carry of the game.

Notre Dame had overcome deficits before, most notably against Pittsburgh, but this game felt different. With the stakes so high and playing on the road against a rival, the Irish had to dig deep.

It didn’t happen immediately. Following two first downs, Notre Dame was forced to punt on its first drive of the game after taking less than two minutes off the clock.

The Trojans picked up right where they left off with their pass-heavy offense. Daniels continued to get the ball out quickly, hitting his receivers on short routes.

“They had all of those free-access throws,” Kelly said. “They had a number of short-yardage situations where they could control the flow of the game.”

Daniels was 7 for 7 on drive number two. On first-and-10 at the Notre Dame 43-yard line, Daniels found receiver Michael Pittman Jr. for a 10- yard completion. As Pittman headed upfield, junior cornerback Troy Pride Jr. forced and recovered a fumble, his third forced turnover of the year.

The Irish failed to capitalize, though, and punted to USC once again. The play-calling mirrored the last two drives: lots of quick passes and occasional running plays. Running back Aca’Cedric Ware came up with the play of the drive with a two-yard run on fourth-and-1. A few plays later, kicker Michael Brown drilled a 30-yard field goal.

The Trojans led 10-0, the Irish’s largest deficit all season.

Following its second scoring drive, USC was dominating in virtually every statistical category. The Trojans had over 200 yards of total offense to the Irish’s 27. While Notre Dame had the ball for just 3:34, USC had 14:35 in time of possession.The Irish needed to wake up. Slowly, they did.

Senior receiver Chris Finke had an 18-yard completion on third-and-10. Two plays later, facing third-and-11, junior quarterback Ian Book high- stepped his way to the sideline and lowered his shoulder for a massive first down at USC’s 36-yard line.

Then it was Finke again, and again.

The senior slot receiver caught another third-down pass to set up first- and-10 at the 25-yard line. Two plays later, Finke hauled in a 24-yard pass from Book and somehow twisted inside of the pylon for his second touchdown of the year.

We just really regrouped, and everyone just did their own job,” Book said. “That’s what we needed to do.”

Just as the tide seemed to be turning, USC put together another impressive drive. Daniels marched into Notre Dame territory and seemed poised to add at least three more points before halftime.

Junior safety Alohi Gilman had other ideas. After collecting two interceptions and the game ball against Syracuse, Gilman poked the ball out of the hands of St. Brown after a 14-yard reception. Notre Dame recovered and entered the locker room down 10-7.

After both teams exchanged punts, senior running back Dexter Williams tallied the game’s first big play. He busted a 52-yard touchdown run, his 13th of the season, to give Notre Dame a 14-10 lead.

The Irish secondary also adjusted after halftime. Daniels and the USC offense could not complete as many short passes in the third quarter, their longest drive just 40 yards.

“We got the game back in our hands in the second half,” Kelly said. “Defensively, we turned the tide and the flow of the game.”

Senior kicker Justin Yoon nailed a field goal to put the Irish up 17-10, but Notre Dame was still looking for the nail in the coffin.

With just over five minutes left in the game, the Irish faced third- and-12 on their own 28-yard line. Once again, Book picked up a big first down with his legs. Two plays later, USC blitzed on third-and-5, and Book was ready. He threw a short pass to junior running back Tony Jones Jr. who had nothing but green grass ahead of him, and Jones entered the end zone untouched. Notre Dame led 24-10.

As Trojans fans headed for the exits, the Notre Dame contingent in Southern California began to celebrate. Despite a USC garbage-time touchdown, the result was clear: Notre Dame was going to the College Football Playoff.

The alma mater played, and the coaches, players and fans were beaming with excitement. Graduate student linebacker Drue Tranquill took a knee at midfield, slowly rose and lifted his arms in the air, victorious.