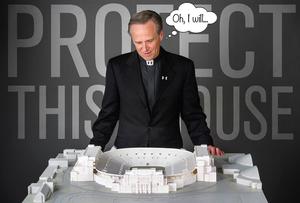 Well known around the college sports world, and especially on Notre Dame’s campus, is the university’s recent switch from Adidas to Under Armour athletic equipment. The $90 million contract, signed in January and put into effect in July, is the most valuable apparel contract in college sports history. But sources in Notre Dame’s athletic department say that a closer look at the contract’s fine print has revealed some new particulars, soon to go into effect.

Among these lesser-known facts about the new Under Armour deal is the company’s complete creative control over each team’s new uniforms.

“If you look at the Notre Dame football team, for example, they’ve always had that classic, iconic look, and that’s something we really like,” says Under Armour spokesman Ulysses Anderson. “That’s why we plan to bring back leather helmets, starting during the 2015 season.”

When asked to elaborate on this decision, Anderson cited “tradition” and “integrity of the game” as main motivating factors. “We really want to bring back that retro Notre Dame look and feel.”

Team doctors have been outspoken in their criticism of the plan based on the many health risks posed by the softer, substantially less protective helmets. As one doctor says, “Wait, they’re doing what?” As of yet, the Under Armour staff remains unconcerned by these so called, “trivial objections.”

A source in Notre Dame’s athletic department also confirmed that Under Armour has decided to exercise their option to replace the university’s mascot. “‘The Fighting Irish’ just sounds too combative, and frankly a little racist,” Anderson says. The official replacement mascot has not yet been named, but “this” and “that” are being touted as the top two contenders.

Under Armour representatives have emphasized a desire for a robust partnership with the university. The athletic apparel company is even getting involved with RecSports and will soon launch an exclusive, highly sought after line of high performance broomball equipment, “modestly priced,” at the bookstore.

New Under Armour priestly vestments were also included as part of the contract. “You just can’t beat this stuff,” says Notre Dame President Rev. John I. Jenkins, C.S.C, sporting a new Under Armour clerical collar. “It really provides increased mobility during the sign of peace. And the micro-fiber construction wicks away excess holy water.” Jenkins expressed hope that the “sick” new “issue gear” would coax out some more vocations to the Congregation of the Holy Cross.

In addition to the equipment issued directly to the athletes, the new deal has also produced a mass of new apparel available to the public at the university’s bookstore. Senior Shannon Falsnomé expressed her excitement for the new gear. “I love the new Under Armour deal!” she says. “I used to have a blue Adidas Notre Dame sweatshirt that I wore all the time. Now I have a new blue Notre Dame sweatshirt with a slightly different logo on it. I plan to wear this one all the time, too.”

Due to the sudden influx of new Under Armour apparel, all old Adidas gear is currently being sold at clearance prices or being used as toilet paper in third world countries, per the contract. Preliminary mock-ups of ‘Auck Fdidas’ T-shirts were toyed around with by Under Armour product development, but were later rejected.