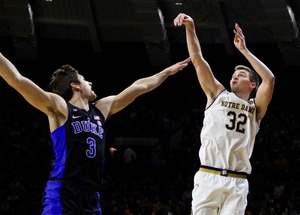 The start to Notre Dame’s basketball season was a historic one, as the team’s 16-2 overall record matched the best start of the Mike Brey era. Their first two marquee wins came in the Legends Classic tournament in Brooklyn, N.Y. The Irish would go on to win the tournament and earn some momentum going into the upcoming gauntlet of the schedule. The Irish won a pair of tight games at the event, first against Colorado and then against now-ranked Northwestern.

Their only two losses of 2016 came within the span of eight days at the hands of two top-20 teams. On Dec. 10, Notre Dame led by five at halftime against then top-ranked Villanova, but the Wildcats stormed back in the second half. A week later, the Irish squared off against Purdue in the Crossroads Classic in Indianapolis. Notre Dame led at halftime once again, only to see the advantage evaporate by the game’s end in an 86-81 loss to the Boilermakers.

The Fighting Irish opened 2017 with four wins in conference play, pushing its conference record to 5-0. The five-win start to the Atlantic Coast Conference season for Notre Dame was the best start of conference play in school history, and put the Irish in first place in the ACC heading into a road showdown with Florida State for conference supremacy. The Seminoles survived a late Irish rally to hand Notre Dame its first ACC loss, and the Irish subsequently struggled to recapture the momentum they’d gained earlier in 2017.

In the four games that followed, Notre Dame had a tough time repeating its success in early conference play. The Irish dominated Syracuse at home for an 84-66 win, but fell 71-54 to Virginia three days later, the lowest scoring output for the Irish all season. On the road against Georgia Tech, the Yellow Jackets broke Irish hearts to win 62-60 on a buzzer-beating layup. Most recently, Notre Dame returned home to face Duke this past Monday. Though the Irish trailed for most of the second half, they had multiple opportunities to regain momentum and take the lead late in the game. Ultimately, Duke’s defense tripped up the Irish attack and handed Notre Dame a 84-74 defeat.

With eight games to play in the regular season, the Irish sit at 17-6 overall, 6-4 in the ACC. On Feb. 7, Notre Dame plays a two-game homestand, squaring off with Wake Forest before a rematch with Florida State on Feb. 11.