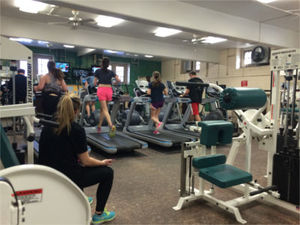 Last year was the year. I had friends who had done it. I had certainly thought about it in years past. And no matter how difficult it proved to be, I knew I would be proud of myself once it was all over. The decision was made. I was going to stop wearing sweatpants to class every day. Plus, I was considering running the Holy Half, but you know, priorities.

I didn’t know too much about what goes into running the Holy Half, so I decided to ask my runner friend Paul what I should do in order to properly prepare. Paul told me that the best way to train would be through a balanced regimen of varied workouts that gradually increased in intensity as the training progressed and the big day grew closer. He also recommended a nutrition plan to make sure that I was fueling properly for increased physical activity. In other words, Paul was completely useless. I ask for Holy Half advice, and instead, a guy I thought was my friend is telling me to eat salads.

What’s next, finding a training partner and getting plenty of sleep? What do I look like? The whole Paul debacle taught me a lesson that proved invaluable throughout my training: I had to trust my instincts. I had the drive and motivation I needed inside myself. I just had to sift through all the seasoned fries, nonfat dreamy dark chocolate fro-yo and sinfully rich chocolate chip cookies to find it.

After a bumpy first few weeks, I fell into a consistent routine, no thanks to Paul. Every morning before class, I would roll myself out of bed, pull on my running shoes and some sweats, and head out onto South Quad. Once outside, I would pop in my earbuds and, if the light was right, snap the perfect training selfie to tweet out to my loyal followers. When I was satisfied with the picture quality, I’d head back inside and go back to sleep. Can you blame me? I was usually wearing shorts, and it was stupid cold out. I couldn’t afford to get sick. I had a race to prepare for!

I had read somewhere that accountability was very important, so I made sure to let everyone know that I was running in the race, and I mean everyone. I wanted to do the whole process the right way. I didn’t want to Holy Half-ass any aspect of the training. So, with that in mind, I began an aggressive campaign to make every human being possible aware of my involvement in the race. I messaged Facebook friends I hadn’t seen in years. I handed out flyers outside South Dining Hall. I even went to Father Jenkins’ office hours to ask him to spread the word. No one was safe, spared excluded.

After weeks and weeks of bragging preparation, race day finally came. I woke up before sunrise, far too excited to sleep. I didn’t know why I was nervous. I had planned everything out so meticulously. The pre-race Instagram, the starting line tweet, every last filter and hashtag: I had it all down backwards and forwards. Nevertheless, I couldn’t shake the feeling that I had forgotten something. There was no time, however, to dwell on this. I had to get to the starting line. We lined up, tense, silent, ready. The gunshot rang out. We were off.

It wasn’t until a few minutes into the race that I realized my mistake. I never realized that the Holy Half is actually short for the Holy Half Marathon. We finished the first half mile, and when the other participants didn’t pull out their phones to make a post-HH victory Snap Story, it became abundantly clear that the race wasn’t over. Instead, I realized that we had 12.6 miles to go. So I did what any dignified man who made a commitment would do. I faked an ankle injury, screamed like a madman and “hobbled” off the race path with my pride.

You might be thinking right now, “Hunter, what did you think the Half meant?” To be honest, I wasn’t thinking about it much. I was far too busy planning outfits around the Holy Half t-shirt that would soon be mine. I’ll admit, my behavior may have been a bit unreasonable, but it’s not my fault if you think about it. After all, Paul gave me some terrible advice.