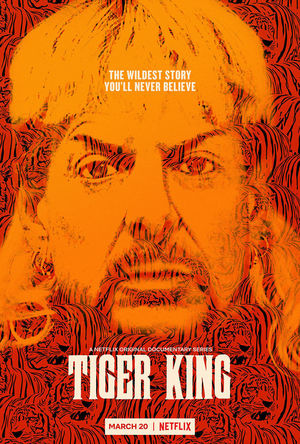 In a time full of unprecedented events, “Tiger King” is somehow undoubtedly the strangest thing I’ve seen in weeks. And it is an absolute must-watch. Bizarre, offensive, upsetting and darkly funny, this Netflix documentary is everything you never knew you wanted.

The primary subject, Joe Exotic, sports a bleached mullet and rows of piercings on both ears. Another silver hoop hangs distinctively at the corner of his eyebrow. He films dramatic music videos of himself singing to his husbands (he has two), and you’ll often find him wearing sparkly button-downs and carrying a baby tiger.

Exotic lives on a compound with cages full of big cats. He, and other tiger owners across the United States, interact with these cats freely. They let them ride around in the front seat of their cars. They play and cuddle with them — all despite the very real danger they pose. At one point, a tiger drags Exotic around his cage by his foot. The whole thing is captured on film: Exotic limps off, screaming expletives, shooting a small pistol at the ground and threatening to shoot the tiger between the eyes.

Exotic is not the only bizarre individual involved in what is rapidly revealed to be a crime-ridden business. There’s Doc Antle, another polygamist and tiger owner, who is suspected of euthanizing baby tigers once they’re too old to be safely held by tourists. There’s Jeff Lowe, a con man that becomes involved in a murder-for-hire plot. And then there’s Carole Baskin, the owner of Big Cat Rescue, who fights to end the sale and breeding of tigers. A considerable amount of time is dedicated to watching Baskin ride her bicycle, hair flowing in slow motion behind her. Watchers also spend a lot of time listening to Exotic describe the many creative ways he’d like to kill her.

The documentary makes some creative errors. It spends too much time on dramatically panning shots of Baskin, a few shots feel out of place or out of order and the interviewers allow their subjects too much time to speculate. But, the story is undeniably fascinating —it's one you have to see to believe.