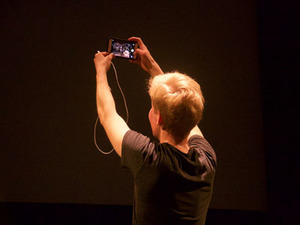 Jacob Schrimpf, a senior Film, Television and Theatre major, performed his thesis entitled “i” at the Debartolo Performing Arts Center on March 22. The show was a one-man multimedia performance in which Schrimpf blended acting with coordinated video, audio and lighting he created himself. It explored hypermodern phenomena such as iPhone dependence and social media-induced identity crisis.

The whole project began with one thought, Schrimpf says. “My initial realization was, ‘Wow, smartphones are everywhere.’ And from there, I started to wonder how they change us as people.”

After conducting research on identity, he reached out to friends and family for old text messages, online posts and voicemails he’d sent. He used this material to formulate several distinct identities that became individual characters in the play. Schrimpf assumed these versions of himself sequentially, depicting a highly personal confrontation with his various selves in a surreal environment laced with ringtones, voice overdubs and lighting effects. A screen behind the stage displayed photos and message screenshots throughout the performance.

“In some ways it was more of a risk for me, because not only was it my idea, it was myself, the things that I have said and done. Everything I used in the show was real,” Schrimpf says. The one-man show format also created its own challenges. “Being alone on stage and still having conflict and relationship develop, that was a big struggle. It was important to have somebody for me to talk to, whether that was my phone, the audience members, whoever,” he says.

The result was a poignant and introspective look at a unique, generational struggle. Can we engage in modern technology while maintaining one genuine, singular identity?  Don’t count on it, says Schrimpf.

“There’s no way to create a unified self. Everything you do is going to be read a million different ways, and they’re not all going to cohere in the way that you think,” he says. “We’re all just kinda this weird, convoluted, conflicting mess of selves all in the same skin.”