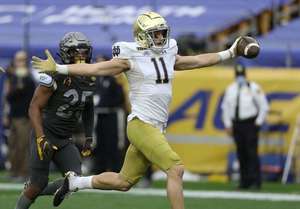 Despite COVID-19 disrupting countless aspects of a normal season, all of the pieces appear to be falling into place for the Notre Dame football team as they approach the season’s marquee matchup against Clemson. Well — almost all of the pieces. The Irish passing game is the one question mark that hasn’t gone away, the one piece of the puzzle yet to fit with the rest.

Quarterback Ian Book has helped lead the team to a 5-0 start but not without a few struggles in the air — as exhibited by Book’s completion percentage of 59.7%. It’s a recurring issue, as Book finished last season with a 60.2% completion rate despite having reliable targets in Chase Claypool and Chris Finke.

Without Claypool and Finke, the wide receivers faced offseason scrutiny. Braden Lenzy entered his junior year with questions about his ability to produce a breakout season. Avery Davis changed positions again, this time to receiver, prompting wonders about whether this would finally be the right spot for the senior. Javon McKinley returned for a fifth year after a few bright performances in 2019. Northwestern grad transfer Ben Skowronek looked ready to provide some much-needed experience to
the receiving core.

The scrutiny regarding the receiving core compounded when spring practices were canceled due to the COVID-19 pandemic.

“We weren’t able to get the reps we wanted to in spring ball and that was frustrating,” Book said when talking to the media last week. “That happened all around the country though with a lot of people, and it was about the teams that were going to move on from that, not give up, and find a way to get those reps even though they were missed.”

Book said the Irish eventually made up that missed practice time in a COVID-safe manner to improve chemistry between himself and receivers.

“We were able to do some throwing sessions that I felt helped us get back to where we would have been if we did have spring practice,” he said.

While there have been many bright moments for the receiving core, it still lacks consistency. Only two Irish receivers have broken 100 yards in a game this year. McKinley and Skowronek have each recorded 107-yardgames — against Florida State and Pittsburgh, respectively. The latter game also saw Book throw for 312 yards, increasing his average to 205.2 yards passing per game. That still lands him 60th in the country and 100 yards per game behind Clemson’s Trevor Lawrence, who averages 305.5 passing yards per contest.

McKinley leads the receivers in yardage with 171 on the season, but 157 of those yards are from the Florida State and Pitt games. Running back Kyren Williams is next with 156 yards, followed by freshman tight end Michael Mayer.

Mayer’s strong play in his first collegiate games has earned him widespread attention. He tallied a season-high 73 receiving yards against Pitt, also adding his second touchdown of the year. The nickname “Baby Gronk” has even been floated around, high praise for the freshman. Praise has also come in from other directions, including from his quarterback.

“Mike is really good. Everybody sees that,” Book said. “His game is just going up and up and up.”

Junior Tommy Tremble has also been a bright spot for the Notre Dame offense, lauded as much, if not more, for his blocking as for his role as a target. But in that latter role, Tremble still has 115 receiving yards on the year.

The tight ends have been a strong component of the successful run game, where Notre Dame offense’s identity currently lies. The Irish are averaging 231.8 rushing yards per game compared to 207.6 passing yards per game. With a running back in every class, Notre Dame has found especially strong, and largely consistent, performances from Williams and freshman Chris Tyree.

Now the Irish will look to see that same consistency they’ve seen on the ground emerge in the air — the final piece of that Notre Dame football puzzle.