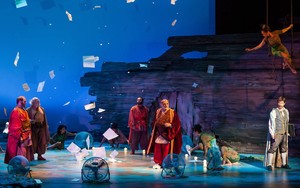 "The Tempest” is one of Shakespeare’s most magical and awe-inspiring works. Set on a island, the play deals with themes of illusion, freedom, wonder and forgiveness. West Hyler, a Broadway Cirque du Soleil director, was well suited to bring the text to life.

“The soul-searching themes of the text and the fantastical setting of the island form a perfect union, and the challenge of ‘The Tempest’ is to balance both in production,” Hyler says.

The most notable directorial decision was the truly aerial Ariel — the magical sprite who enchants the island — portrayed by trapeze artist Sarah Scanlon. A company of actors, musicians and acrobats played Ariel’s ‘quality’ by roaming and tumbling about the stage and audience, enacting Ariel’s will as he remained suspended above the stage.

Choices by costume designer Jeremy Floyd reflected the tension between the two worlds of the play: the European nobles and the inhabitants of the island. The shipwrecked nobles were appropriately dressed in Baroque clothing, while the costumes of the island’s inhabitants were dramatically different.

Tattoo-covered Prospero, the usurped Duke of Milan sent away to live on the island long ago, “bridges the gap between the two worlds,” Floyd says. “Ariel and the other magical beings … exist in no specific time or place. They are created from the island itself.”

This production of The Tempest invigorated the text with magic and spectacle, and it was visually captivating from start to finish.