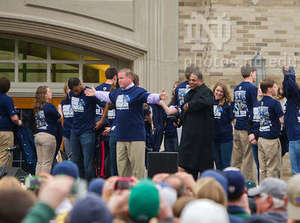 With the Blue and Gold game on the horizon, Notre Dame fans and students prepare for the one of the biggest moments of every year: the unveiling of the Shirt.

The Shirt started in 1990 as a way to raise money for Notre Dame student clubs and activities. It was meant to be a unifying symbol for the student body in the 1990 opening football game against the University of Michigan. That first year, over 9,000 shirts were sold.

Now in its twenty-sixth year, the Shirt project has grown into one of the many storied traditions of Notre Dame Football. Half the proceeds from the Shirt go to The Shirt Charity, which aims to help students afford medical expenses. The remaining revenue funds student clubs and the Rector Fund, which allows all students to have the full “Notre Dame experience” by covering most events or activities sponsored by the residence halls, Student Government, Student Activities, or the University for students who meet financial aid guidelines.

The sales of the Shirt have skyrocketed in recent years. Catherine Williams, a member of the Shirt Committee, estimated that approximately 20,000 shirts will be sold in the first weekend alone.

Much of the increase in sales is due to the hype created around the revealing of the Shirt itself in the Unveiling Ceremony. This year, the Unveiling Ceremony will be even bigger than usual, featuring student performances from groups like the Glee Club, the Irish Dancers, the Cheerleaders, and the Notre Dame Marching Band. The Shirt itself will be revealed by Notre Dame’s own Officer Tim McCarthy, best known for his highly anticipated safety tips during football games. Officer McCarthy retired from announcing at the end of the 2014 season.

Williams said that the Unveiling Ceremony is not just geared towards students.  She said, “The Shirt Committee wants to reach out to the South Bend community because they are a big part of the University. We want this to be a fun day for them as well.”

In order to achieve this goal, the Unveiling Ceremony will include booths with activities such as face-painting, and giveaways featuring items from stores like Vineyard Vines. The Shirt Committee has also partnered with Coca-Cola’s “Share a Coke” campaign, and will be offering personalized Coke cans designed on the spot. Free food from South Bend restaurants like Barnaby’s and Let’s Spoon will also be available.

For the first time ever, the Shirt Committee partnered with the year-old Notre Dame Day, a fundraising event focused on “a global celebration of everything Notre Dame.” Williams said that the Committee is excited by the new partnership and hopes the new venue will increase sales.

Last year was the 25th Anniversary of the Shirt. The 2014 Committee revealed a special design featuring the stadium and the slogan “Then. Now. Forever.” By the end of the year, the Committee sold 165,000 shirts.

When asked about this year’s Shirt, Williams was secretive. “The Committee poured over every detail of the Shirt, from the color to the fabric to the dimensions,” she said, “As always, we wanted to tie together the storied history of Notre Dame and the bright future that our school has in store. For more than that, you’ll have to come to the Unveiling!”

The Unveiling Ceremony will begin at 5:30 pm in front of Notre Dame’s Hammes Bookstore on Sunday, April 26. The Shirt itself will be officially revealed at 6:57 pm. The Ceremony will be broadcast live at notredameday.nd.edu.