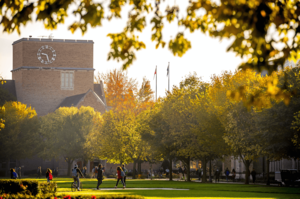 “I didn’t know how good I had it,” senior Mike Stemling lamented, describing his first three and a half years of hard science classes.

“How well you had it,” interrupted Katie McConnelly, a junior English major on a mission to prove the unacknowledged truth of Our Lady’s university: that the college of Arts & Letters is the most demanding college at Notre Dame. To prove her point, she found two non-Arts & Letters majors to support her — or, rather, one pre-health chemical engineering double major, Stemling.

After finally finishing all his requisite lab courses, Stemling started this spring believing he would coast through his literature requirement. Little did he know how poorly his previous curriculum had prepared him for the intense requirements of a true liberal arts education.

“People think Arts & Letters is soft, you know, like how they call it ‘the college of Arts & Crafts,’” he explained. “What they don’t realize is that arts and crafts are really hard work.” His most recent assignment for his “Evolution of Children’s Literature in America in the Twentieth Century” class was a colorful collage, more than a match for the four-hour labs of previous semesters.

“With all the work, I find I actually have less time now,” he claimed. (“Fewer time,” corrected McConnelly, not quite under her breath.) Other factors contributing to the shameful disparity in workloads include one-page reflections due once a week in many humanities classes. These are often graded “for completion,” which means they must be completed in order to earn credit, leaving absolutely no room in Arts & Letters for slackers.

Perhaps the greatest demand of the college, though, is the requirement for class participation. As sophomore computer science major John Ray put it, “I don’t come to class to talk, I come to be talked at.”

“Ending that sentence with a preposition is one of the worst grammatical errors I’ve ever heard of,” McConnelly complained, shaking her head.

The pressure to speak in class at least once per week evokes at least the same amount of blind panic as staring at an incomprehensible reaction on an organic chemistry exam.

It might look as though there are no hard facts behind her claims, but never fear: McConnelly used the skills she learned in her Statistics for Business class (for the A&L Business Economics minor) to conduct a quantitative analysis. She found that on average, Arts & Letters students do three times as much homework as engineers. Or maybe it was 0.3 times. Math was never her strong suit.