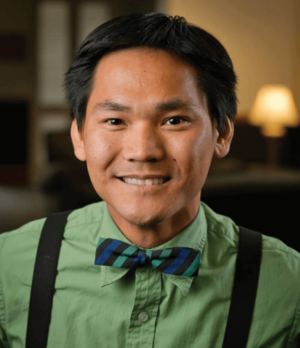 Maybe you have seen him popping ollies on his skateboard or zooming around campus on a Onewheel. Maybe you have been lucky enough to meet his dog, Milo. Maybe you’ve heard of him taking Rev. Pete McCormick, C.S.C. jet-skiing on St. Joseph Lake.

You have certainly heard his music.

Nhat Nguyen, the rector of Duncan Hall, is far from your typical Notre Dame rector. For starters, he is famously known as DJ DuLac, the iconic DJ who provides the soundtracks for various events, including SYRs and — most importantly — Domerfest.

Even when he isn’t dropping beats, Nguyen still infuses a room with vitality, explained Zachary Tyler, a first year in Duncan. “He is always a cheerful presence full of energy and joy, doing his best to make sure that all of us at Duncan feel at home and have something to do and something to look forward to,” he said.

Nguyen has been the rector of Duncan Hall since 2015, having previously served as the rector of the Fischer, O’Hara-Grace Graduate Residences. “I feel like I’m called to be a rector, but it does take a bit of energy and insanity,” Nguyen joked.

To build community, Nguyen makes sure each resident practices Duncan’s pillars of community, brotherhood and respect. “We embody it as a community,” Nguyen said. “It is what makes Duncan, Duncan.” But having discerned priesthood and attended seminary, Nguyen views his job “as a ministry” and is most comfortable in the role of pastoral leader.

“He has considered going into the priesthood or religious order, but people don’t want to lose him,” said Cian Conroy, a sophomore Duncan resident, recounting how Nguyen received a standing ovation when announcing he would remain in Duncan for another year.

The love Duncan residents have for their rector is reciprocated by Nguyen. “He is extremely passionate about Duncan and about everyone who lives here. His goal is to make our experience the best as possible,” junior Jason Wanamaker, Duncan’s president, said. “If it’s going to help the community, he does it.”

Wanamaker noted that the COVID-19 pandemic has made it “more of a challenge to feel that sense of community,” however. “This year it has been a more concentrated effort.”

Tyler Dann, a senior and resident assistant in Duncan, said that Nguyen and the hall staff have focused on “creative ways that we can gather together safely, in person or virtual.”

This creativity enabled the Duncan Highlanders to host the Yoga SYR last semester, where over 100 students set up towels and yoga mats six feet apart on McGlinn fields and listened to music while following the instruction of a certified yoga instructor.

In place of the Highlander Highrise, Duncan’s signature dance, which typically takes place on the top floors of the Willis Tower, the hall staff hosted The Dunkies, a comical award show. Duncan residents got dressed up to see select dorm members win awards such as “Best Pseudo RA” or “Most Likely to Go Hard in a Debate and Still Lose,” according to Conroy.

It was “such a hit that we’re going to have it as a separate event every year,” Wanamaker said. “We got to celebrate the people that make Duncan what it is.”

To Wanamaker, the success of The Dunkies reflected the success of Duncan’s efforts to build a tight community, even during the pandemic. “We had to get creative and we made a new tradition for years to come,” he said.

Nguyen has worked hard to make sure the Highlanders have safe ways to stay connected and have fun, helping the hall staff plan events such as Karate Night, Duncan Acoustics, Section Olympics and more.

“He’s made it clear that you can follow guidelines and be really safe while connecting with people,” Conroy added.

From supervisory tasks, like enforcing guidelines and helping residents “grow up,” to facilitating adventures, such as creating socially distanced events and bringing students out on his jet skis, Nguyen is determined to share the highest of highs and lowest of lows with students.