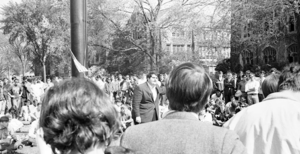 A deeply unpopular political establishment, a military embroiled in war, a society marked by inequality and injustice — these profound problems threatening Americans 50 years ago galvanized a radical wave of student protests across the country.

In the late 1960s, students objected to the Vietnam War as well as the prospect that upon graduation the class of ‘69 could find themselves fighting in Vietnam. They were spurred to action.

Student demonstrators staged “sit-ins” in the main building, protesting Notre Dame’s connections to the war. Although Notre Dame’s protests never became violent — as they had on other campuses — the university president, Rev. Theodore Hesburgh, C.S.C., warned of the threat of “lawlessness.”

To prevent such “lawlessness,” Hesburgh added, “Anyone or any group that substitutes force for rational persuasion, be it violent or non-violent, will be given 15 minutes of meditation to cease and desist.” This became known as the “15-minute rule.”

Nine months later, on Nov. 18, 1969, Dow Chemical and the CIA were scheduled to recruit students on campus. Dow Chemical produced Napalm and Agent Orange; the CIA, at the time, had been plotting a coup in Chile. The announcement sparked outrage from students and faculty, who circulated petitions opposing the recruitment event.

According to Peter Cajka, a professor of American Studies at Notre Dame, 1969 was still “a moment where a university that has connections to war becomes severely ethically and morally problematic.”

On Nov. 18, protests erupted in anticipation of the recruiting event. The normally tranquil office space beneath the golden dome was teeming with a restless crowd of students. Imagine, as Cajka described, “occupying the main office building for several hours with 200 people,” taking on “protests that get people expelled.”

While walking to the library that morning, John Eckenrode, class of ‘72, caught a glimpse of a group of anti-war protestors congregating beneath the golden dome and decided to join them. Eckenrode was surprised to be participating in the protests. He, like many of his classmates, considered himself as an ordinary student, just trying to focus on school.

At the time, Notre Dame usually wasn’t “swept up with all these issues, especially the political issues,” Eckenrode recalled. He added, “It was an all- male campus” and “It was still, I think, a fairly conservative place back then.” It was the “growing sort of social and political consciousness in terms of the broader things happening in the country,” alongside existing strands of pacifist Catholic social teaching that exposed Eckenrode and his classmates to radical critiques of the existing order.

The “hypocrisy going on at the university, the complicity of the university and some of the structures or institutions that were supporting the war at the time, as well as broader issues of imperialism and economic injustice and so forth” inspired the protesters to take action, he added.

The students were divided on the type of action they wanted to take: some were satisfied with holding a silent, sitting vigil. Others, Eckenrode included, “decided that more direct action was called for to block the doorways,” which would obstruct the CIA and Dow representatives from entering the main building. Unable to disperse them, Rev. Theodore Hesburgh, C.S.C., invoked his “15-minute rule” for the first and only time in the history of the university.

After 15 minutes, only 10 students remained, Eckenrode among them. Campus authorities collected their ID cards, and facing suspension and even expulsion, they decided to argue their defense together. The group became known as the Notre Dame 10.

Initially prepared to expel some of the students, Fr. Hesburgh’s administration decided to suspend them and offer them readmission in spring 1970. However, the readmission process was far from simple. Mark Mahoney, another member of the Notre Dame 10, told Scholastic in an email, “our draft boards were notified immediately, exposing all 10 students to being promptly drafted into military service.” Mahoney added that “three of the 10 never returned to ND to graduate, contrary to what Fr. Hesburgh recalled in his memoir which sadly trivialized the impact of these suspensions.”

Several members of the Notre Dame 10, including Mahoney and Eckenrode, will visit campus on Nov. 18 to discuss activism with students and faculty. Mahoney, who has revisited campus several times since he graduated, addressed the controversy surrounding the university’s “corporate and military involvement” and what he views as an ongoing need for change.

“On each occasion, it was rather surprising how little had changed on campus, in terms of the social and political and moral issues with which we were at odds with the administration 50 years ago,” he wrote. “It is exactly this, rather than nostalgia, that brought us back before, and brings us back again.”