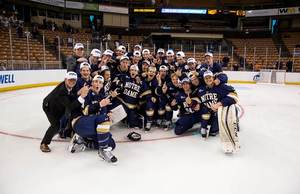 As Notre Dame Hockey’s last season in Hockey East comes to a close, they are making sure that they will be missed when they depart for the Big Ten next fall.

On March 24, the Irish booked their ticket to the Frozen Four in Chicago’s United Center when they were crowned champions of the Northeast Regional with an emphatic win over conference rival UMass Lowell.

The road to the Frozen Four, however, wasn’t exactly the smoothest one.

The Irish came into tournament ranked 12 of 16 teams and ranked last in their respective regional. Calling them underdogs in the tournament, let alone their own regional, wasn’t an exaggeration by any means.

In the first round the Irish quickly lived up to pollsters’ expectation for them, going down two goals early on. Halfway through the second period, however, a comeback sparked by goals from forwards Andrew Oglevie and Anders Bjork saw the Irish come back and unexpectedly win 3-2.

After the come-from-behind win against the Gophers, the Irish entered the regional final against UMass Lowell — a team they lost to 5-1 just nine days earlier in the Hockey East Championship. Despite the prior loss, the Irish rallied from behind just as they did against Minnesota to top the River Hawks in a dramatic 3-2 overtime win to cash their ticket to the Frozen Four.

In the Frozen Four along with the Irish are the top three teams in the country: Denver, Harvard and Minnesota- Duluth. The Irish face off against the Pioneers of Denver — the top seed in the tournament. If these past couple weeks have taught us anything, though, it’s that seeds don’t matter when hockey is played in the spring; at least not to the team of 26 from South Bend.