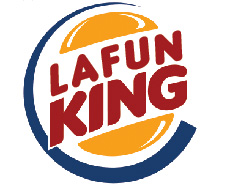 Today was the big day!  After totally rocking my interview and displaying a knowledge of the fast food industry and a passion for fry-cooking that would put SpongeBob to shame, I finally had my first shift as a student worker at the Burger King in LaFun!!!  I could hardly contain myself all day, I was just so excited!  You know as well as anyone, Diary, that as long as I can remember, I’ve always wanted to break into the fast-paced, high-stakes world of corporate fast food middle management, and this is my first step in making my dreams come true!  Today, I was trained to be a cashier.  Just think of all the fun, interesting people I’ll get to meet!  I’m sure it’ll be a pretty stressful job, what with the constant barrage of customers and all, but at least that means non-stop action and excitement.  I just can’t wait to spread the cheerful exuberance of the Burger King attitude to everyone I meet!  Except, of course, to anyone affiliated with McDonald’s Corporation®, the spawn of Satan.

So I’m starting to notice that students don’t really come to this Burger King as often as I thought they would, and I just don’t get it.  I mean, it’s not like there aren’t any hungry students around.  Every day at lunch, the line at Subway wraps around the corner and I’m here all by myself just waiting, hoping someone will come and order something.  I wonder if people even know we’re open.  I actually saw a tumbleweed roll by today.  A FREAKING TUMBLEWEED.  How did that even get in the building??  I thought I saw someone looking in my general direction once, which is the most contact with another human I’ve had since I started this job, but it turns out she was just watching that giant TV on the wall next to me.  On the bright side, one guy came up and blew his nose with a napkin from our dispenser today, so I think I’m gonna go ahead and consider that my first sale.  Here’s to more in the future!

I’m convinced the LaFortune Student Center is a desolate wasteland, devoid of life.  I’m utterly alone.  It’s just me and the frozen patties.  WHY DOES NO ONE COME TO THE BURGER KING IN LAFUN???  I’m not sure if I’m just delirious and hallucinating, but I’m pretty sure the French fries are starting to talk to me.  I need help.  Is it me?  Am I why no one goes to Burger King?  Am I ugly?  Do I smell bad?  Maybe I’ll invest in some new deodorant… At least you’ll always love me, right, Diary?  Diary?... ANSWER ME, DIARY!!

Is anyone out there?

So I did Sudoku, a 10,000-piece jigsaw puzzle and solved world hunger during my last shift.  I’m starting to wonder if our fryers were ever even functional, or if they’re just for show.  I wouldn’t know because I’ve never needed to turn them on… The other day I literally tried to give away a burger, but I think running after a 70-year-old woman yelling, “TASTE MY WHOPPER!!!” might not have been the best idea in hindsight.  I don’t think she understood what I was trying to say.

Anyway, I think I have one last idea that will hopefully get us some more customers.  It might sound a little crazy, but just hear me out, Diary: We stay open late on weekends.  Drunk college kids will eat anything, right?