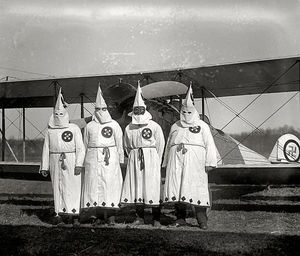 Just over 93 years ago, Notre Dame students experienced an event that feels all too relevant given recent instances of social unrest across the country. When the Ku Klux Klan descended on a South Bend train station in anticipation of a rally in May of 1924, Notre Dame students who happened to be at that same station chose to act. They pushed back the Klansmen and effectively ended their forthcoming Indiana convention, as the Irish Echo reported in 2002.

Raymond C. Cunningham, a 1925 grad, contributed his thoughts on the matter in a January 1925 issue of Scholastic. Cunningham declared that the Klan “pretend[s] to be motivated by their patriotism and their one hundred percent Americanism,” all the while condemning their acts as falsely chauvinistic. He labeled their motivation as “racial hatred and religious prejudice,” and stated that they were “deceived by their bigotry and their ignorance.”

Just as Cunningham and the Notre Dame students fought back against the Klan’s presence nearly a century ago, residents of Charlottesville, Virginia opted to take a stand against extremists this past August. When a white nationalist rally was held in their city center, nearby Virginians stood up to the protesters. Ultimately, one woman lost her life.

“What may we hope for America?” Cunningham asked in his Scholastic piece. If Charlottesville and the Notre Dame students of 1924 set any precedent, citizens standing up to hatred may well be that aspiration.