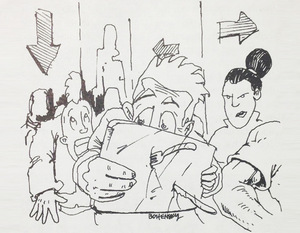 The North-versus-South Dining Hall dispute is as much of a trademark of campus as the Golden Dome or Touchdown Jesus. Almost 20 years ago, SDH was renovated into the chaotic space that exists today.

In the September 24, 1998 issue of Scholastic, Jesse Kent wrote an amusing article detailing his traumatic experience with the (at the time) newly-updated South Dining Hall. Likening the lack of clear lines and overwhelming sea of students to the “Bermuda Triangle,” his experience is relatable, especially to a loyal North lover.

There’s no doubt that South is superior in terms of aesthetics and that North’s rooms can be bizarre — though not for much longer, courtesy of impending renovations. The “survival of the fittest” atmosphere of South, however, is still as evident now in 2016 as it was in 1998. Although initially charmed by a particularly slow day and the newly furnished facility, Kent quickly found himself drowning in a throng of people as he tried to navigate his way through the madness.

Between the “Valley of Salad Bars” (let’s admit it, South does have a lot of salad bars) and the seemingly randomly-placed buffets and dispensers, it’s easy to feel lost. For those of you who are familiar with the feeling of a pounding heart and sweaty palms at the thought of entering South, find comfort in the knowledge that you are not alone. The students of days long past felt the same SDH-induced anxiety.

As Kent concludes, SDH won’t be changing anytime soon. And neither, so it seems, will the controversial debates over dining halls here at Notre Dame.