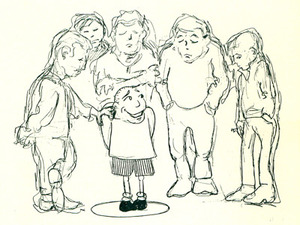 In the Oct. 30, 1964 issue of Scholastic, students debated a change to the dorm system. Before then, the school put all freshmen in five dorms separate from the upperclassmen, known among students as the “freshman ghetto.” Students seemed to generally prefer the system the way it was rather than opening all halls to any class and designating a percentage of rooms in each dorm to different grades.

Students believed that keeping the freshmen together was important to maintaining a strong class community. Each dorm had such a distinct culture that students thought it would be unfair to force freshmen into a specific one. Under the current system, they could choose a dorm culture to join once they became sophomores. Students also worried that upperclassmen would be limited in which dorm they could pick, once spots were taken by freshmen. The influences of the study habits of upperclassmen on underclassmen was also a concern, as it could be better for freshmen to learn how to study through experience.

Those in favor of changing the system believed it would expand the freshmen’s circle of friends and experiences, allowing them to mature more quickly. Overall, however, the article was in favor of keeping the system the way it was. The dorm culture that Notre Dame prides itself on might be much different had they done so.