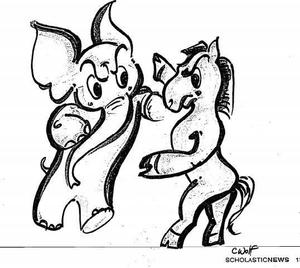 It seems that it’s becoming more and more important for the students of Notre Dame to vote. A walk from South Dining Hall to LaFun can be filled with dozens of flyers that remind you to exercise your civic duty with tons of catchy slogans or comics. One famous slogan is “Don’t Vote, Don’t Care.” It’s not necessarily true, though, that students don’t care about the election.

In the October 26, 2000 issue of Scholastic, writers found similar problems in the student body, making a point that still holds true today: “Quite a few young people are so diligent that they feel bad casting an ignorant ballot.” Many students on campus can attest to the fact that there are many memes and jokes about our 2016 candidates, but not enough accessible information. How many students know enough about Clinton’s Social Security plan to feel comfortable voting for her?

16 years ago, Scholastic came up with its own “CliffsNotes” version of the 2000 presidential election, complete with a handy table of candidates’ stances for quick reference. No student could’ve predicted, though, the controversial outcome of that election. It goes to show that, truly, every vote counts. So students, do your research, and choose wisely. Though candidates from any year don’t agree on much, anyone can agree that your vote is important.