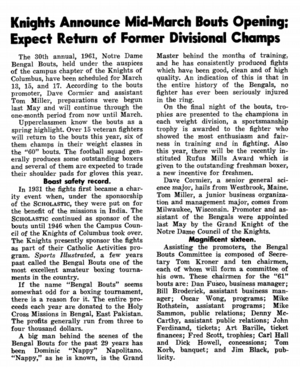 Notre Dame’s campus looked vastly different in 1961. Many of the buildings the campus occupies today had yet to be constructed, and the student population was still exclusively male.  However, some of the university’s traditions had already been adopted by the 1960s. Bengal Bouts, Notre Dame’s renowned boxing program, was one of them.

In its Feb.1961 issue, Scholastic previewed that year’s competition.

“Upperclassmen know the bouts as a spring highlight,” the Scholastic article said. “Over 15 veteran fighters will return to the bouts this year, six of them champs in their weight classes in the ‘60 bouts.”

The article also reviewed Bengal Bouts’ then-30-year history. In 1931, the boxing program adopted its fundraising initiative, which was sponsored by Scholastic until 1946 when the Knights of Columbus took over the role. That fundraising initiative for the Holy Cross mission is the same today, and it has remained key to the program’s identity.

“I love how when you’re looking at the guy on the other side of the ring, you know he’s still your teammate, and you’re both still fighting for the same cause,” said Terrance Cameron, a current sophomore member of Bengal Bouts. “In the end, it’s not about who had a better spar, but what we’re doing as teammates to do as much as we can for the people in Bangladesh.”

While Bengal Bouts’ mission has remained constant since 1931, the program has changed in some ways since Scholastic’s Feb. 1961 issue.

“The football squad generally produces some outstanding boxers and several of them are expected to trade their shoulder pads for gloves this year,” the article said.

Football players used to be involved in the bouts as off-season training — given that Knute Rockne originally started the boxing program — but have since relied on the football team’s spring workouts instead.

The Bengal Bouts program has received attention from various media outlets over the years, another consistency over the decades.

“Sports Illustrated, a few years past called the Bengal Bouts one of the most excellent amateur boxing tournaments in the country,” Scholastic’s 1961 issue said. More recently, ESPN has covered the final round of the bouts. This year’s final is on Feb. 29, with preliminaries beginning on Feb. 13.