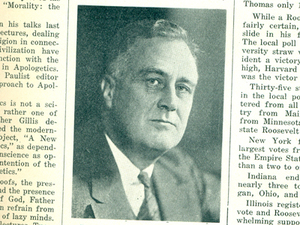 WHAT'S THE DEAL? Scholastic looks at another election cycle.

The headline read “Wranglers Endorse Roosevelt Candidacy” as a student group endorsed Franklin D. Roosevelt for what would be the first of his four general election wins.

In the Oct. 28, 1932 issue of Scholastic, students were faced with the prospect of yet another pivotal presidential election — a topic we, as current students, are contemplating today.

The Wranglers, however, proved a bit more formal in their presentation of the topic. “The Oregon system of debate functioned perfectly, with each member of the Wranglers advancing questions or commentations on the speech, after which, the convincing decision favoring the endorsement of Roosevelt, was reached,” the Scholastic issue said.

Today, there is roughly a year until this exact brand of national fervor hits campus. Through platforms such as ND Votes ’16, the efforts of such student groups as the College Republicans, the College Democrats and BridgeND, we are already feeling some extent of it now.

Notre Dame, true to its academic nature, remains a place involved in the national scene — and, to that extent, its political side as well. Even more than eight decades later, that specific “commentation” holds true.

All that is left to tell is who exactly will win this 2016 election. In this 1932 issue of Scholastic, students voiced their opinions on what kind of man they thought would do that: a man that would come to be held as one of the greatest in the country’s political history.