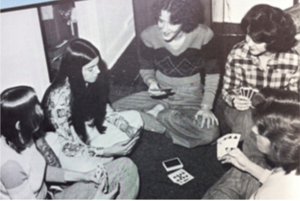 Photo Courtesy of the University of Notre Dame

“He brought me over to the window and said, ‘One day I’m going to meet my maker. Now, I knew when that day came, I wouldn’t be able to explain how I had been president of the university of Our Lady and not let women attend,’” Heather Rakoczy Russell, associate vice president for residential life, said of Father Theodore Hesburgh, C.S.C. When she walked into his office, Rackoczy Russell recalled, Hesburgh “was smoking a cigar and his feet were up on the desk.”

In the Sept. 13, 2012 issue of Scholastic, Joshua Whitaker reports on the history of gender relations at Notre Dame in an article titled “Our Ladies’ University.”

According to the alumni Whitaker interviewed, the road to becoming a “Modern Notre Dame Woman,” was nothing short of an uphill battle.

“The saying was ‘I’m not here for my MRS degree,’ Rose Tenney, class of ‘81, said. ‘Some girls were very sensitive about the perception that they had come to ND to catch a husband.’”

Although Notre Dame welcomed its first coed freshman class in 1972, Notre Dame’s first female student body president was not elected until 2002. Tenney recalled a hostile encounter with a male alumnus. “When I said I attended Notre Dame, one of the men said, ‘You’re the reason my son didn’t get accepted.’” She added, “I didn’t answer him, but I thought to myself that I had earned my place at ND.”

Teresa Buckley Holdcomb, class of ‘78, recounted another instance where a date of hers asked, “Who wants to date a girl who wants to be president of the United States?” Reflecting on her time at Notre Dame, Holcomb added, “If you were a female, then you had better be tough and confident.”

In 2012, women made up 49% of the undergraduate population and 12 of the last 14 Fulbright scholars. Of the past fifteen valedictorians, 47% were female and 5 of the last 11 class presidents were women.

“Great strides have been made,” Rackoczy Russell said, “but there is still room to go.”