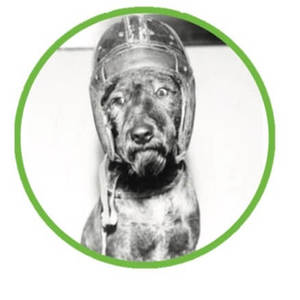 In the Oct. 28, 1999 issue of Scholastic, Meredith W. Salisbury wrote a cover story about Notre Dame folklore. Ranging
from traditions to ghost stories, “Tales beyond the Crypt” includes a particular bit of lore about the university’s mascot — “but not the leprechaun,” Salisbury clarified.

The Irish terrier became the official mascot in November 1930, after the “Fighting Irish” nickname gained popularity. The first mascot dog was a gift to Knute Rockne during a game weekend. The football coach “couldn’t remember the dog’s full name: BrickTop Shuan-Rhu,” according to Salisbury. “They called him Mike, and for a period of almost 40 years a series of dogs called Clashmore Mike roamed the Irish sidelines.”

In 1960, Terry Crawford was the first student to serve as leprechaun in the sidelines, alongside Clashmore Mike and the Irish cheerleaders. The TIME magazine issue of Nov. 20, 1964, featured Theodore Drake’s official design — the bearded leprechaun we all know and love — in front of a smiling football head coach Parseghian. The University ultimately adopted the leprechaun as its new official mascot in 1965.

The Irish terrier certainly left a mark on the university’s history and campus — one only has to look close enough to discover it. In her article, Salisbury pointed out that there is a stone carving of Clashmore Mike on Alumni Hall. The dorm adopted the “dawg” as their mascot to commemorate Rockne and his dog. And Brendan O’Shaughnessy, a professor in the university’s Gallivan Journalism Program, has co-authored two children’s books about Clashmore Mike. The books are available online, some going for hundreds of dollars.