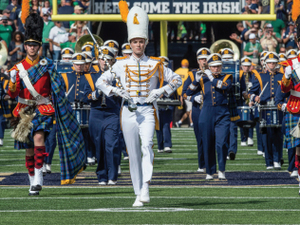 Ten years after female students were first admitted to Notre Dame, Scholastic writer Molly Nyland argued for more social development and integration of women on campus. In May 1982, her article “Move Over Rockne — Women Are Here to Stay” reflected the changing gender notions of the time.

Women at Notre Dame during those early years faced a number of problems in pursuit of equality. Molly Noland wrote, “It is halftime at the Notre Dame/LSU game. Tears well up in alumnae’s eyes as the Fighting Irish band … leads the fans in the traditional ‘Notre Dame Our Mother’ and ‘Notre Dame Victory March.’ When the show is over, the drum major struts 20 yards ahead of the band, leads them off to the sidelines, and quickly removes the cumbersome ‘shako’ hat that adds to the stifling September heat. Suddenly, cries of ‘it’s a girl’ echo throughout the audience as Toni’s dark brown hair falls to her waist. No one can believe that Notre Dame, the school known for its red-blooded, all-American men, allows a girl to lead its band!”

It is now approximately 45 years since the first 325 women were admitted, and considerable progress has been made since that initial 17:1 male-female ratio. Women now make up roughly 50 percent of the student body. Noland wrote that the first woman to run for student body vice president won votes only in her home dorm of Lyons; this year, the school elected its second female pairing for student body president and vice president. In 1982, only six varsity sports were offered for women. Today there are twelve, compared to fourteen offered for men. In addition, women are now involved in all fields of study and the number of female faculty members has grown substantially since 1982, when Nolan reported there were only five female administrators and twelve tenured women, compared to 350 tenured men.

While many argue true equality is still on the horizon, the school has changed enormously in less than five decades. Back in 1982, Molly Noland fiercely declared that Knute Rockne, a symbol of male dominance at Notre Dame, should move over. But Rockne knew something about building a strong team; as he himself once said, “Build up your weaknesses until they become your strong points.”