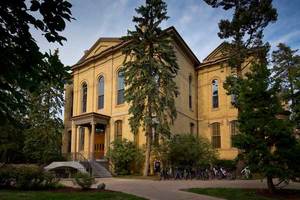 From across campus, students ascend the LaFortune Student Center stairs to grab a bite to eat, study for an imminent test or to trim their long hair. Whether you’re sinking your teeth into a decadent SmashBurger entrée, making a late night Huddle run or going to an SYR, LaFun is always a reliable place for an enjoyable time.

As its sharp but oddly satisfying odor suggests, LaFortune has had a long and storied history. Instead of pumpkin spice lattes and Soft Taco Party Packs, you were more likely to find bacteria specimens and Bunson burners back in 1883 when the structure opened as the old science hall. However, with the construction of Nieuwland Hall of Science in 1952, the strictly academic importance of the building began to fade.

In the 1950s, student centers were becoming all the rage on college campuses; it wasn’t long before Notre Dame began eyeing spaces that fit the bill. Fortunately, with a generous $135,000 donation from Joe LaFortune – an Oklahoma oil tycoon, Notre Dame alumnus and World War I veteran – the school procured enough funds to reconfigure the Old Science Hall.

University president Fr. Ted Hesburgh, C.S.C. dedicated LaFortune on September 23, 1953 at the sophomore cotillion. The November 13th, 1953 edition of Scholastic declared the center to be a resounding success because it “proved away game weekends don’t necessarily have to be the dull, uninteresting things they have been in the past.” Furthermore, “The Center provid[ed] students and their dates with a place to spend a quiet, enjoyable evening of doing what they want to do without getting trampled to death in the process.” Along with social spaces, the student center featured “pool tables and ping-pong paraphernalia.” There was even a television set!

Since its inception, LaFun has undergone multiple renovations and expansions such as the opening of the “Huddle Snack Bar” in 1957 and the addition of the ballroom in 1986.

Today, while the well-worn student center often takes a backseat to gleaming Duncan, the space still buzzes with activity. If the walls of LaFun could talk, they would speak volumes about our community. Here’s to hoping we continue to fill them for years to come.