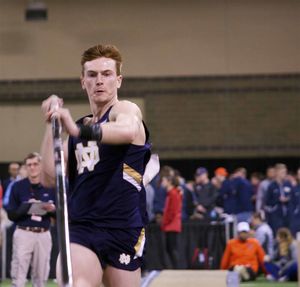 The weekend of Feb. 23 to 25 marked a historic moment for Notre Dame Track and Field: The school hosted the Atlantic Coast Conference Championship for the first time.

In the midst of bone-chilling snow and temperatures which dropped into the mid-20s, Loftus Sports Center was warm — full of cheering fans and sweaty athletes — as Notre Dame took on 14 teams at home.

“Our student-athletes are accustomed to training and competing on it,” head coach Alan Turner told UND.com.

“We also have an advantage of getting extra rest by not having the long flights and sleeping in our own beds.”

Following the recent close of the regular season, the Irish men and women came in with high aspirations.

Senior pole vaulter Nathan Richartz, who was recently named Conference Performer of the Week and ranked thirdbest in the ACC, said before the tournament, “I hope to jump 18 feet and defend my Indoor ACC Title.” Yet, there is no shortage of competition. Richartz said,

“Two men in the ACC have already jumped higher than I ever have, so I hope I can rise to the occasion this weekend.”

Irish now ranked second in the ACC and 21st in the nation.

On the last day of the meet, Harris won two gold medals — in the distance medley relay and the mile — as she rushed through the finish line with disbelief and a triumphant smile. As friends and Irish fans swarmed in to congratulate Harris, she said, “I’m probably most proud to celebrate my teammates’ PRs this weekend — especially in our 800 and mile squad, we had some great performances that set them up well for a really good outdoor season.”

In the women’s 5,000-meter, Rohr earned a top mark in the ACC and fifth-best time in the nation. On the men’s side, Richartz finished third overall in the pole vault, holding the ninth-best mark in the country he set earlier this season.

Ultimately, the women’s team placed fifth, and the men’s team came in eighth.